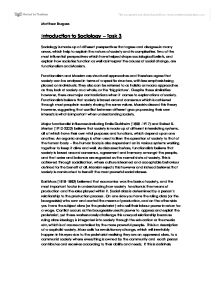 Evaluation of Functionalism and Marxism

Introduction to Sociology - Task 3 Sociology is made up of different perspectives that agree and disagree in many areas, which help to explain the nature of society and its complexities. Two of the most influential perspectives which have helped shape sociological beliefs, and explain how societies function as well as interpret the causes of social change, are functionalism and Marxism. Functionalism and Marxism are structural approaches and therefore agree that society can be analysed in terms of a specific structure, with less emphasis being placed on individuals. They also can be referred to as holistic or macro approaches as they look at society as a whole, or the 'big picture'. Despite these similarities however, there are major contradictions when it comes to explanations of society. Functionalists believe that society is based around consensus which is achieved through most people in society sharing the same values. Marxists discard this theory however, suggesting that conflict between different groups pursuing their own interests is what is important when understanding society. Major functionalist influences including Emile Durkheim (1858-1917) ...read more.

who sell their labour power in return for a wage. Conflict occurs as the bourgeoisie uses its power to oppress and exploit the proletariat, yet these workers rarely challenge this unequal relationship because ruling class ideology is integrated into society through the education or the media etc, which is of course controlled by the more powerful people. This is a description of a capitalist society. Marx calls for revolutionary change, which will inevitably happen in his eyes due to the proletariat realising they are an oppressed class, to a communist society where everything is owned by the community and each person contributes and receives according to their ability and needs. If this is definitely going to happen however, when will that revolution occur? No time limit is set on this and whilst communism does not appear imminent, it may lead many people to question it as a very subjective opinion which cannot be proven. These perspectives don't come without their critics. Some argue that a limitation of both functionalism and Marxism is that they both ignore the individual's freedom of choice. ...read more.

It obviously identifies a ruling class juxtaposed with a subject class, however it seems to generalise people of different genders, ethnicity, sexuality and ages into these two categories. What Marxism also fails to provide is an explanation of non-economic conflict and why this might occur, electing to only discuss that of the bourgeoisie and the proletariat. Religious disagreement that leads to conflict could be considered as non-economic and could be fought by many different types of people on both sides, which may include in some cases two different classes of people, as Marxists would describe them, working together for a common belief. While both of these perspectives are very popular, it may be the case that they are not entirely suitable for explaining every part of society. Instead, they each are better at explaining different areas. Functionalism excels at explaining balance and harmony in society whilst Marxism focuses its attention more on inequality and conflict. Societies never remain the same and things are always changing, which may mean it's unlikely that a sociological perspective will ever solely be able to master explaining all aspects of society in great depth, and even if it does, it may not take too long before it becomes unrealistic or outdated. ?? ?? ?? ?? Matthew Burgess ...read more.