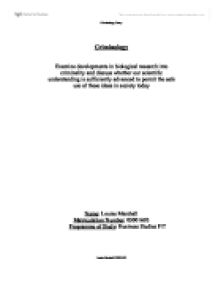 'Examine developments in biological research into criminality and discuss whether our scientific understanding is sufficiently advanced to permit the safe use of these ideas in society today.'

One in seventy to ninety births are twins, in this amount one in four are monozygotic. In thirteen pairs of male monozygotic, seventy seven percent of them had both twins in prison or committing a crime, and in dizygotic the rate was seventeen percent, this study had a control group which was two hundred and fourteen pairs of brothers this rate was eight percent. This proved to the researcher that criminal behaviour is hereditary. The down side of this study was that there were not enough samples and the splitting the twins into monozygotic and dizygotic was based only on visual impression so the study was not reliable because some monozygotic twins were dizygotic. DNA testing now reduces that risk of false pairing. This study is not scientifically proven to relate hereditary to criminals therefore unable to be used in out society today making it unsafe to use in determining the link. There have been many twin studies throughout the twentieth century, this included Lange in 1929, he concluded 'as far as crime is concerned, monozygotic twins on the whole react in a definitely similar manner and dizygotic twins behave quite differently'. An adoption study is another way of investigating the impact of hereditary on crime. Also trying to determine if there is a link between the adoptee and adoptive parent seeing if they learn there criminal behaviour. If a child is adopted at a young age when born then they will develop more like its parent than their natural mother. If someone was to be removed from a criminal parent at an early age and placed in a non criminal home and then goes on to be of criminal behaviour this evidence can them provide a link between criminal behaviour and genetics. ...read more.

Since then Mednick et al (1981) wanted to answer this study, they took EEG recordings from Danish boys aged between ten and thirteen. The recordings were then done 6 years later with the boys who had committed a crime compared to those who had not. The findings included that those who had been arrested for crimes showed a large level of slow brain wave activity . Another study that had been done on offenders was on the intelligence level of the offender. Alfred Binet developed a test to school children which was designed to report who needed assistance. The result of the test was known as their 'mental age', these tests were given to inmates by Henry H Goddard in 1914. The test appeared to show that the offenders were not intelligent but 'feeble' minded. That's when others assumed that criminal have lower IQ than others. Hendilang in 1977 believed that failure in school can lead to the adoption of criminal behaviour. Any scientific study of criminal behaviour will uncover the causes of such criminal behaviour such as aggression and the causes that are beyond control. All the studies mentioned are not highly recommended in convicting people to crime. The biological research into criminality can be way to understand crime and why people commit them, but they all are not sufficiently advanced to prove that any factor can be used to commit someone to a crime. None of these studies mentioned can be used in society, they are either too small a sample to go by, or sometimes unrealistic. People are individuals they react differently, even when involved in alcohol or drugs, they are there own person. They are individual; you can not base someone on someone else's findings. ...read more.