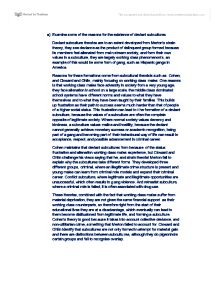 Examine some of the reasons for the existence of deviant subcultures. Assess the view that gender is the best predictor of crime.

a) Examine some of the reasons for the existence of deviant subcultures Deviant subculture theories are to an extent developed from Merton's strain theory, they see deviance as the product of delinquent group formed because its members feel alienated from main stream society, and form their own values in a subculture, they are largely working class phenomenon's, an example of this would be some form of gang, such as Hispanic gangs in America. Reasons for these formations come from subcultural theorists such as Cohen, and Cloward and Ohlin, mainly focusing on working class males. One reasons is that working class males face adversity in society from a very young age, they face alienation in school on a large scale, the middle class dominated school systems have different norms and values to what they have themselves and to what they have been taught by their families. This builds up frustration as their path to success seems much harder than that of people of a higher social status. This frustration can lead to the formation of a deviant subculture, because the values of a subculture are often the complete opposite of legitimate society. ...read more.

Cohen adds a different perspective on the s*x role theory saying that young boys often are without a male role model, thus experiencing anxiety about their identity as young men, this can lead to formation of street gangs were aspects of masculinity can be expressed and rewarded, and although this can cement masculine identity, it also encouraged delinquent behaviour. On the other side of this view from the feminist Heidensohn 1996, 2002, drew on the control theory arguing that women have more to lose than men if they deviate from norms, because of the male dominance of society, the control of females discourages deviance from norms. Women are still largely confined to the house and the 'mother' role, this results in female reliance on the male to be a financial supporter, so things like domestic abuse upon a male for example would result in a lot more of a negative situation for a women then a man. Outside the home women are also confined, many are reluctant to go out after dark in fear of attack, or for being labelled as a harlot. Although this theory provides some explanation of reduced rates of female criminality, it also displays women as passive and simply accepting their situation, and she also makes sweeping generalisations about men and women and their subsequent roles. ...read more.

be criminal through their heritage, but often this over representation can be down to over policing, discrimination and r****m from police forces. For example, since the 9/11 attacks, stop and search rates for Pakistani men went up a huge amount, with their likelihood of being searched being nearly 8 times higher than that of a white man. These 2 ethnicities in particular have been made out to be folk devils, stimulated by the media and moral panics, which could lead to over policing in areas where people of this ethnicity reside, resulting in a disparity in statistics. In conclusion, although official statistics possibly over represent men to some extent, it cannot be argued that men are less criminal than women, it is just the extent to how much more criminal they are that can be argued. Factors discussed earlier like class, age and ethnicity all provide valuable source for indication of criminality, gender is probably the most accurate, but it is also the least specific, although technically a male is more likely to be criminal than female, this does not mean a male will always be more criminal, so a combination of all the earlier discussed factors would be the most reliable indicator of criminality. ...read more.