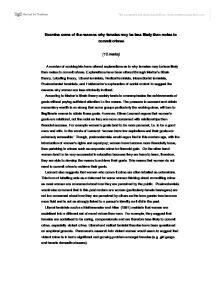 Examine some of the reasons why females may be less likely than males to commit crimes (12 marks) A number of sociologists have offered explanations as to why females may be less likely than males to commit crimes. Explanations have been offered through Merton's Strain theory, Labelling theory, Liberal feminists, Radical feminists, Interactionist feminists, Postmodernist feminists, and Heidensohn's explanation of social control to suggest the reasons why women are less criminally inclined. According to Merton's Strain theory society tends to overemphasise the achievements of goals without paying sufficient attention to the means. The pressure to succeed and obtain momentary wealth is so strong that some groups particularly the working class, will turn to illegitimate means to obtain these goals. However, Eileen Leonard argues that women's goals are relational, not financial as they are more concerned with relationships than financial success. For example women's goals tend to be more personal, i.e. to be a good mum and wife. In the words of Leonard: 'women have low aspirations and their goals are extremely accessible.' Though, postmodernists would argue that in this modern age, with the introduction of women's rights and equal pay; women have become more financially focus, thus partaking in crimes such as corporate crime for financial gain. ...read more.

access to paid employment. This suggests that liberal and radical feminist ideas only offer a partial view on crime and deviance. Interactionist feminists reject all these explanations, seeing them as little more than a social construction. They point out that females are under-represented in the statistics and therefore the statistics do not present an accurate picture of the social distribution of criminality, which may mean that women don't in fact commit crime less. Interactionist feminists share Becker's (1963) idea that the social distribution of crime and deviance is dependent on processes of social interaction between the deviant and powerful agencies of social control. Interactionist feminists suggest that females are less likely to be policed and labelled deviant than males. Perhaps this is because of sexism and chivalry within the police. Official statistics indicate that women in all age groups appear to commit far less crime than men. This may be due to leniency towards female offenders, also known as the 'chivalry' thesis. Campbell (1981) conducted a self-report study and found that female suspects were more likely than male suspects to be cautioned rather than prosecuted. The rate of male: female juvenile offending was 1.33: 1.0 rather than the official figure of 8.95: 1.0, suggesting that women may not be committing less crime but rather that they are being punished less (Police let women off (Mott/Kalven & Zaesel), which then influences the official statistics. ...read more.

Therefore, being victims of crime themselves they come to fear crime and thus being unwilling to partake in crime themselves. The relatively low levels of female Asian offending can be partly explained by higher levels of surveillance and social control experienced within the family. Similarly, white majority female youth are more likely to be raised in homes with both parents than their black female peers - and this type of family profile is statistically associated with lower rates of juvenile offending. Functionalists would argue that women commit less crime because of the way they are socialised. Women are socialised to respect the cultural and social values and norms. Obeying the law is a social norm, therefore, women are socialised to adhere to the law. This means that women tend to commit less crime than men who are socialised differently. In conclusion, despite these explanations offered for why women commit less crime than men, the area of gender and crime remains one that is largely understudied and neglected in the sociological world. It is strange that giving women's backgrounds they are still less likely than men to commit crimes seeing as how more women live in poverty than men. Yet is seems the explanations all boil down to the differences in the way women and men fear the consequences of crime and risk-taking. ?? ?? ?? ?? ...read more.