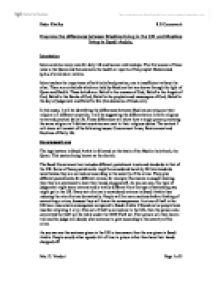 Examine the differences between Muslims living in the UK and Muslims living in Saudi Arabia. Introduction Islam contains many rules for daily life and human relationships. The first source of these rules is the Quran and the second is the hadith or reports of the prophet Muhammad (p.b.u.h's) words or actions. Islam teaches the importance of both belief and practice; one is insufficient without the other. There are six beliefs which are held by Muslims that are shown through the light of Quran and Hadith. These beliefs are: Belief in the oneness of God, Belief in the Angels of God, Belief in the Books of God, Belief in the prophets and messengers of God, Belief in the day of judgement and Belief in fate (the decisions of Gods will). In this essay, I will be identifying the differences between Muslims carrying out their religion in 2 different countries. I will be suggesting the differentiation in both religious terms and practical daily life. These differences will show how a single person practising the same religion in 2 distinct countries can react to their religious duties. The content I will show will consist of the following issues: Government Laws, Environment and Routines of Daily life. Government Laws The legal system in Saudi Arabia is followed on the basis of the Muslim holy book, the Quran. This system being known as the shariah. ...read more.

If someone is seen to be rushing and hasty towards business, then this is taken a sign of bad manners. People in the UK are generally hospitable though there are a few inconsiderate people. People involved in business shall set fourth as they wish and usually rush to get things done. All sexes are allowed to take part in business and mix freely between each other. An issue of concern that arises is that of women not being allowed to drive. Women in Saudi Arabia are not allowed to drive alone. They may only drive if they have a man who is a mahram (A man who the women is not allowed to marry by Islamic law) sitting next to them. The purpose of this might be because women are more vulnerable than men, so in their own safety they shouldn't drive. Sometimes this can be a problem. If a woman wants to get somewhere urgently and there is no person about to get her there, and she has a car, it would be very difficult for that woman because she would not be allowed to drive the car. She would have to find another way around the problem of getting to that destination. In the UK, women are allowed to drive alone as long as they have a valid UK Driving licence. The above issue of the women needing to get somewhere urgently wouldn't be a problem because she would be able to go by herself. ...read more.

All food provided to Muslims in schools is Halal and therefore they have nothing to worry about. Also the only religion taught in Saudi Arabia is Islam so they wont get confused about what they are learning. As for the older generation in secondary schools in the UK, I say there is a bigger problem. This is because the teenagers are at a stage where they are likely to feel attracted to girls, though it is against the religion of Islam to have relationships before marriage. In the situation of a comprehensive secondary school, Muslim teenagers would find it hard to control their desires and would therefore resort to relationships. This in turn would weaken their faith thus making it difficult to practise Islam properly. Also the issue of school dinners can be a problem in secondary schools. This is because the pupils would not know whether the food provided by the school is lawful or not, thus making their diet limited. Overall, I think that it would be easier for a good Muslim to practise their religion in a school strictly with their own s*x, rather than have their education in a mixed sexes school and also in a school where they have a separate Halal diet for Muslim students. Routines of Daily life The Routines of Daily life for a practising Muslim are similar what ever culture or country they in or from. The main things that are of concern and which I will be discussing are: Prayers, Holidays, Working conditions, Entertainment and luxuries. Kader Khalfey R.E Coursework Mrs. D. Vandort Page 1 of 5 ...read more.