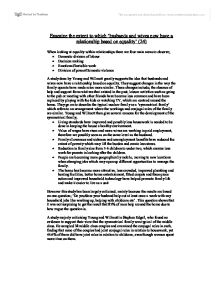 Examine the extent to which 'husbands and wives now have a relationship based on equality' (24) When looking at equality within relationships there are four main areas to observe; * Domestic division of labour * Decision making * Emotional/Invisible work * Division of power/Domestic violence A study done by Young and Willmott greatly supports the idea that husbands and wives now have a relationship based on equality. They suggest changes in the way the family operate have made roles more similar. These changes include; the absence of help and support from relatives that existed in the past, leisure activities such as going to the pub or meeting with other friends have become less common and have been replaced by playing with the kids or watching TV, which are centred around the home. They go on to describe the typical nuclear family as a 'symmetrical family' which refers to an arrangement where the workings and conjugal roles of the family are similar. Young and Willmott then give several reasons for the development of the symmetrical family; * Living standards have improved and possibly less housework is needed to be done in keeping the house a healthy environment. * Value of wages have risen and more wives are working in paid employment, therefore are possibly seen as on the same level as the husband. * Family allowances and sickness and unemployment benefits have reduced the extent of poverty which may lift the burden and create less stress. * Reduction in family size from 5-6 children to under two, which creates less work for parents in looking after the children. ...read more.

also found that resources were shared unequally, claiming that among low-income families, women denied their own needs, seldom going out and eating smaller portions or skipping meals in order to make ends meet. Also Graham (1984) found that over half of the women living on benefits after separating from their husbands said they and their children were better off stating that benefits were a more reliable source of income. The trend in many households was that a woman has no entitlement to a share of household resources, seeing money spent on herself as money that ought to be spent on essentials for the children. Even in households with adequate incomes, resources are shared unequally, leaving women in poverty. Feminists Pahl & Vogler (1993) looked at how each partner's contribution to family income affects decision making in the family. They found that there were 2 main types of control over family income; * Pooling - Where both partners have access to income and joint responsibility for expenditure e.g. a joint bank account. * Allowance system - Where men give their wives an allowance out of which they have to budget to meet the family's needs, with the men retaining any surplus income for himself. They argue that pooling is more common within marriages where both partners work full time and that it is on the increase, but also that the male usually made the important decisions. Hardill (1997) supported this view in her research on 30 dual-career professional couples, finding that the important decisions were usually taken by the man alone or jointly and his career took priority when deciding whether to move house for a new job. ...read more.

* Liberal feminists believe that progress has been made to gain equality and that men are adapting to the change which brings hope to the future of equality. * Marxist-feminists argue that the role of the housewife helps to serve the needs of a capitalist society therefore is needed for society to function. * Radical feminists as shown above feel that inequality was created by a patriarchal society and the oppression of women is a result of it. They also see their oppressed role as rooted in their biological role as mothers. The evidence from several studies and the views of sociologists show that there is still a lot of inequality between husband and wife but it is possibly less easy to spot and therefore seems to be increasing. However there has been an improvement since wives have taken up paid employment and husbands have started to take more of an active role in the housework and childcare in the home. The act of decision making is still largely in the hands of the husband, with the most important decisions being made by him and the less important ones by the wife, but it is affected by who is in paid employment within the household. The wife also has the role of keeping everyone's emotions in check and this is often overlooked in the analysis of work done, with things such as planning also neglected. Domestic violence shows that there is still inequality between husband and wife, with the majority of cases being the man abusing the woman so therefore the male is still the dominant in marriage. ...read more.