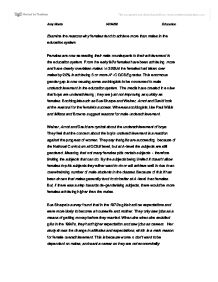 Examine the reasons why females tend to achieve more than males in the education system Females are now exceeding their male counterparts in their achievement in the education system. From the early 90's females have been achieving more and have clearly overtaken males. In 2003/4 the females had taken over males by 20% in achieving 5 or more A*-C GCSE grades. This enormous gender gap is now causing some sociologists to be concerned in male underachievement in the education system. The media have created the view that boys are underachieving; they are just not improving as quickly as females. Sociologists such as Sue Sharpe and Weiner, Arnot and David look at the reasons for the female's success. Whereas sociologists, like Paul Willis and Mitsos and Browne suggest reasons for male underachievement. Weiner, Arnot and David are cynical about the underachievement of boys. They feel that the concern about the boy's underachievement is a reaction against the progress of women. They say that girls are succeeding because of the National Curriculum at GCSE level, but at A-level the subjects are still gendered. ...read more.

Even though subjects at A-levels are still gendered, for example, males tend to take physics and biology, whereas females would pick sociology and food technology. Females have more successful role models to look up to and aspire to, in the education system there are more women in senior leader teams now, rather than it being mainly consisting of men. Also changes in education have allowed females to do well in their GCSE's and A-levels due to coursework. Females do better at coursework because they are more organised and 'wordy' and can meet deadlines, whereas boys aren't as efficient in time management and are not so 'wordy'. Paul Willis states that the reason for male underachievement is due to the fact that they are actively trying to fail at school. They have created an 'anti-school' subculture where they have to live up to their macho reputation. By doing this they have sealed their opportunity for success and are blocked by the restrictions of the group to learn or do well in education. ...read more.

This is because they may feel that there are no other jobs out for them than in the service sector - these jobs may be seen as feminine which will deter the boys from aiming their sights into service jobs. In conclusion, girls have been over achieving due to changes in the national curriculum and having higher aspirations of careers. Boys have still been increasing in achievement, but they have not succeeded as well or as quickly as the girls, so are classed as underachieving by the media. The education system has an awareness of gender inequalities. In the 1980's there were school initiatives such as 'Girls into Science and Technology', and by 1988 the National Curriculum made it compulsory for all students to do exactly the same subjects. These have helps females achieve higher, and even exceed male achievement. In the future, I feel that the gender gap will decrease as boys become more aware of jobs and qualifications that can help them in later life; so put more effort into getting good qualifications. I believe that there will still be some de-individualisation and self fulfilling prophecy, but it will be on a lesser scale. ?? ?? ?? ?? Amy Morris 14/04/08 Education ...read more.