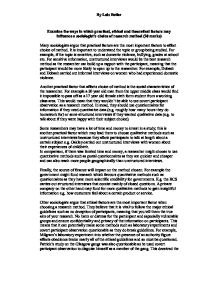 Examine the ways in which practical, ethical and theoretical factors may influence a sociologists choice of research method

Examine the ways in which practical, ethical and theoretical factors may influence a sociologist's choice of research method (20 marks) Many sociologists argue that practical factors are the most important factors to affect choice of method. It is important to understand the topic or group being studied. For example, if the topic is sensitive, such as domestic violence, bullying, grades at school etc. For sensitive information, unstructured interviews would be the best research method as the researcher can build up a rapport with the participant, meaning that the participant would be more likely to open up to the researcher. For example, Dobash and Dobash carried out informal interviews on women who had experienced domestic violence. Another practical factor that affects choice of method is the social characteristics of the researcher. For example a 30 year old man from the upper middle class would find it impossible to pass off as a 17 year old female sixth form student from a working class area. This would mean that they wouldn't be able to use covert participant observation as a research method. ...read more.

how customers feel about a certain product or service. Other sociologists argue that ethical factors are the most important factor when choosing a research method. They believe that it is vital to follow the major ethical guidelines such as no deception of participants, meaning that you tell them the true aim of your research. No harm or distress for the participant and especially vulnerable groups and ensure confidentiality and privacy of the information on participants. This means that it can potentially make some methods such as laboratory experiments and covert participant observation questionable as they do break guidelines. For example, Milgram's laboratory experiment into whether the presence of an authority figure affects obedience broke nearly all of the ethical guidelines and so must be questioned. Patrick's study on the Glasgow gangs was also questionable as he used covert participant observation to disguise himself as a member of the gang. This deceived the participants into thinking he was a 16 year old boy when he wasn't an also put his own and the participants' safety at risk. Finally, lots of sociologists argue that the most important factor affecting choice of method is not the practical or ethical factors but the theoretical perspective of the researcher. ...read more.

An example would be that Dobash and Dobash were able to discover the patriarchal nature of domestic violence by using informal interviews. Another type of research method that interpretivists would use is a case study e.g. the case study of Genie. This is because they can research sensitive matters and gain very detailed and rich information. In conclusion, sociologists tend to choose methods which are fit for their purpose. This means that the most important factor in the choice of research method is the topic or group being studied because sometimes you can't get much information using some research methods and it may not be practical. For example, using questionnaires to gain information about what grades students got in their exams won't be very effective as many students would be sensitive about that topic. Using informal interviews would be better than questionnaires as the researcher builds up a rapport with the participants. In order to increase both reliability and validity sociologists often triangulate and use quantitative and qualitative methods to gain validity and reliability. For example, Barker's study of the Moonies used both overt participant observation and questionnaires, and Mac an Ghaill used observation, questionnaires and secondary quantitative methods to get high validity and reliability in their research. ?? ?? ?? ?? By Lois Butler ...read more.