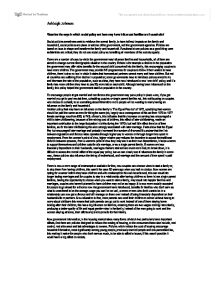 'Examine the ways in which social policy and laws may have influenced families and households' Social policies sometimes seek to reinforce the normal family, to have indirect impacts on the family and household, social policies are plans or actions of the government, and the government agencies. Policies are based on laws to shape and transform the family and household. Functionalist see policies as a good thing were as Marxists are critical; they do not see social policy as benefiting all members of the society equally. There are a number of ways by which the government may influence families and households, all of them are aimed to change current demographic situation in the country. If there is for example a decline in the population the government may offer extra benefits for the second child conceived into the family, this encouraging couples to have more children. The government may provide IVF programmes for couples to follow if their unable to have children, there is also no law in which it states that h********l partners cannot marry and have children. ...read more.

Facts show that the Equal Pay Act encouraged later marriage and probably increased the number of divorces! It's unclear that the link between legislation and divorce rates operates through higher pay to women or through longer time spent in employment. From the women's point of view, higher relative pay reduces the incentive to accept the traditional division between spouses, from a women's point of view they may see it as their own dependence, it helps women to support themselves and children outside of a marriage, or as a single parent family. If women are less financially dependent on their husbands, marriages that are strained are much more likely to break down, it is difficult to assess the overall effect of the equal pay policy, but we can clearly see it influences the family in some way., these policies also influence the timing of motherhood, and marriage and the amount of time spent in paid employment. There is now a more range of contraception available for free, now couples can choose when to start a family or, to stop them from having children, this wasn't the case 50 years ago when you had no choice. ...read more.

Policies which reduce the cost of housing encourage household formation, most significantly among young people, previously married people and one-parent families, this making it easier for people who don't earn as much, to be able to afford a house, if this wasn't possible it would have a big effect on society. In conclusion any discussion about how the family should or should not conduct itself also involves the government with their policies and laws, but in a way we are all influenced by family life, as children ourselves and then when we move on to form our own family, we have an impact to bear on the individuals who make up our family. Policies and laws try to shape the family and household, as the government think is best, although as we can see different policies fit different families better we all have the right to do and say as what we think is best, because in the end it is our family. ?? ?? ?? ?? Ashleigh Johnson ...read more.