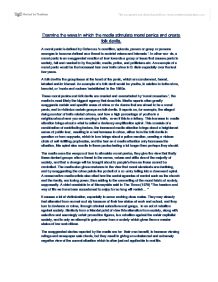 Examine the ways in which the media stimulate moral panics and create folk devils. A moral panic is defined by Cohen as 'a condition, episode, person or group or persons emerges to become defined as a threat to societal values and interests '. In other words, a moral panic is an exaggerated reaction of fear towards a group or issue that causes panic in society, felt and reacted to by the public, media, police, and politicians etc. An example of a moral panic would be the increased fear over knife crime in Britain especially over the last few years. A folk devil is the group/issue at the heart of the panic, which are condemned, feared, labelled and/or blamed. ...read more.

This increase in media attention brings about a what is called a deviancy amplification spiral .This consists of a combination of contributing factors, the increased media attention brings about a heightened sense of public fear, resulting in a real increase in crime, either from the folk devils in question or from copycats, which in turn brings about a police reaction, creating a vicious circle of self-fulfilling prophecies, and the fear and media attention only increases the situation, this spiral also results in these panics lasting a lot longer than perhaps they should. The media uses the weapon of fear to stimulate moral panics, they give the view that firstly these deviant groups offer a threat to the norms, values and attitudes ...read more.

They may already feel alienated from normal society because of their low status at work and school, and they turn to deviance or crime, through criminal subculture and gangs, in an act of rebellion against society. Similarly from a Marxist point of view this alienation from society, along with selective and seemingly unfair prosection figures, is a rebellion against the unfair capitalist society, and is only an attempt to gain power from a society which gives them a master status of low rank citizen. The exaggerated stories reported by the media are for their own benefit, to increase viewing ratings and newspaper sale charts, but they result in giving an unbalanced and extremely negative view of the current situation which is often just not applicable to real life. ...read more.