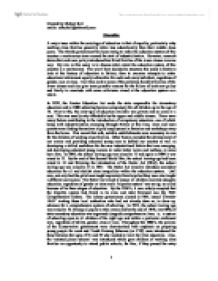 Education A major issue within the sociology of education is that of equality, particularly why working class families generally attain less educationally than their middle class peers. The British government has been trying to make the education system of this country a meritocracy since around the start of industrialisation. However, research shows that each new policy introduced has failed families of the lower classes in some way. My aim in this essay is to discuss what extent the education system of this country is a meritocracy. The way I have decided to structure this essay is firstly to look at the history of education in Britain, then to examine attempts to make educational attainment equally achievable for each and every individual, regardless of gender, race or class. I will then look at some of the problems faced by families of the lower classes and also give some possible reasons for the failure of each new policy and finally to conclude with some criticisms aimed at the education system as a whole. In 1870, the Forster Education Act made the state responsible for elementary education and in 1880 schooling became compulsory for all children up to the age of 10. Prior to this, the only type of education available was private and so came at a cost. This was usually only affordable by the upper and middle classes. There were many factors contributing to the introduction of compulsory education, one of which being with industrialisation sweeping through Britain at this time, more and more parents were finding themselves in paid employment in factories and workshops away from the home. This meant that safe, suitable establishments were necessary to care for the children of working class families. Other factors included the development of our armies and providing educated young men to defend our country as well as developing a skilled workforce for the new industrialised Britain that was emerging, and developing educated young women to make better wives and mothers, to name but a few. ...read more.

What followed was the 'Comprehensive System' and those who favoured this system did so because they believed the damaging, unfair stigma of the 'eleven plus failure' would be removed. It was thought that by enabling children of different social backgrounds to mix with each other that a cultural 'rub-off' effect would occur and that it would be of particular benefit to the working classes. However, with this system, the schools and the class sizes were too large and impersonal and more children were held back as the teachers had more children to focus upon. The system has also been criticised for not breaking down the class barriers. Children of working class backgrounds tend to mix with other children of working class backgrounds in the lower academic groupings, whilst children of the middle classes, in the higher academic groupings, tend to mix with other middle class children. Also, the aim of the Comprehensive System was to improve academic results but the results are fundamentally unchanged. Instead they reappear in new guises as the educational environment changes. The final and most recent attempt at providing equality within the British education system came with the 1988 Education Reform Act. This saw the introduction of various new schemes nationwide. In particular, the Government laid down, for the first time, a 'National Curriculum' that required both boys and girls to study both sciences and languages. Previous to this, boys would tend to study sciences and girls would tend to study languages. This act also introduced a new qualification known as the 'General Certificate of Secondary Education' or 'GCSE', which replaced the previous two tier system of 'O' Levels for the more academic pupils and CSE's for those judged less able; it meant that all students would now be entered for the same exams. The National Curriculum also meant that all subjects, nationwide, would contain the same core content and students would be taught the same regardless off the school they went to or where they lived. ...read more.

Then, in 1975, the s*x Discrimination Act prohibited s*x discrimination in admission to schools, appointing teachers and in giving careers advice. It also specified that neither boys nor girls should be refused access to courses or benefits based solely on their s*x. Since this act, the achievements at both 'O' Level and 'A' Level have been reversed, however, males still achieve more at university. Until 1997, the majority of university students were male with 80% of university professors being male. It has been suggested that that there is a difference in innate ability between boys and girls. However, while researchers have looked for evidence suggesting girls have lower levels of ability than boys, they have found that if anything, it's the boys with the lower innate ability. Although, this could be because girls generally mature quicker than boys but by the age of 16, the boys have again overtaken the girls. Therefore, it seems apparent that of previous years, girls have been held back during the earlier years of education. In conclusion, it seems as though some sociologists claim that inequality within education has a biological rather than a cultural basis which returns us to the nature/nurture debate. Within the education system today, all students have access to the same educational provisions regardless of social backgrounds but only if everyone has equal opportunity to succeed can the system be seen as a meritocracy. The sheer existence of a private, independent education sector to which access is restricted according to income and social background is clearly not meritocratic. Also, labelling and typing, which is done on the basis of social class and/or race, is strongly linked to educational achievement. Essentially, today in Britain, the education system is a meritocracy although not completely and it hasn't always been. It still fails some families but the number of pupils leaving school without any qualifications has fallen considerably suggesting more have been able to develop. More students are now taking 'A' Levels and the proportion of students in higher education has risen from about 10% in the 1960's to around 40% in the 1990's. ...read more.