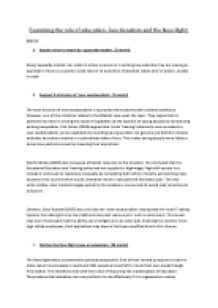 Examining the role of education- Functionalism and the New Right:

﻿Examining the role of education- Functionalism and the New Right: Item A: 1. Explain what is meant by ?upwardly mobile?. [2 marks] Being ?upwardly mobile? can relate to either a person or a social group whereby they are moving or aspiring to move to a superior social class or to a position of elevated status and/ or power, usually in a job. 1. Suggest 3 criticisms of ?new vocationalism?. [6 marks] The main function of new vocationalism is to provide the economy with a skilled workforce. However, one of the criticisms relates to the Marxist view upon the topic. They argue that its authentic function is serving the needs of capitalism at the expense of young people by reproducing existing inequalities. Phil Cohen (1984) argued that Youth Training Schemes (a course related to new vocationalism), serves capitalism by teaching young workers not genuine job skills but instead attitudes and values needed in a subordinate labour force. This makes young people more likely to accept low paid jobs as well as lowering their aspirations. Rob Strathdee (2003) also conveyed a Marxist response to the situation. He concluded that the Vocational Education and Training policy had not supplied a ?high-wage/ high-skill society? but instead it continued to reproduce inequality by compelling both ethnic minority and working class students onto courses which would ultimately result in low paid and low status jobs. ...read more.

School is where secondary socialisation takes place. An installation of a sense of national identity is also said to be key within education and that it should affirm it. The aim of this is to integrate pupils into a single set of traditions and cultural values. 1. Using material from Item A and elsewhere, assess the contribution of functionalism to our understanding of the role of education. [20 marks] Functionalism is the basis of consensus where the view is based on society being a system of independent sectors held together by a shared culture. Functionalist sociologist, Durkheim, identified the two main functions of education. He stated that it created both social solidarity and teaching specialist skills. Without social solidarity, Durkheim argued that social life and cooperation would be impossible as each person would pursue their own selfish desires. This is one of the positive aspects towards the role of education as he said that school acted as ?society in miniature?, introducing us to the more impersonal adult world. An example of this corresponds to both the school and work environment. Within both situations, cooperation is required with people who are neither family nor friends; e.g. teachers and students within school/ employees and bosses at work. Interaction has to be based on a set of impersonal rules that apply to everyone. ...read more.

For example, the working class children will end up with the working class jobs. This therefore can be said to be based on ascribed status based on social class. This concludes to be a negative role of education as employment is not being based on the individuals? intellectual ability but instead his/ her class. It prepares the youth for work purely for a capitalist society. Above we can see many factors that discuss both positives and negative views on the role of education involving the division of labour where Durkheim states that it promotes solidarity and is a source of human freedom whereas Marxism held that it destroys solidarity and constrains individual freedom. Also the views involve Talcott Parsons? in which he focused on education being organised in meritocratic principles. Although from a Marxist viewpoint, the ?myth of meritocracy? is ruled out and instead its perspective is that social background will ultimately determine future prospects as ascribed status is the key function dismissing social ability. Overall, in my opinion, I believe in the functionalist viewpoint where education is a pivotal role in society and is the prime building block to secondary socialisation which prepares children in a civilised manner, for the world of work. This is a major positive viewpoint. I think this because it provides the skills and habits necessary for acting and participating within society and inducting all individual members into its moral norms, attitudes, values, motives and social roles so society can rest in valued consensus. ...read more.