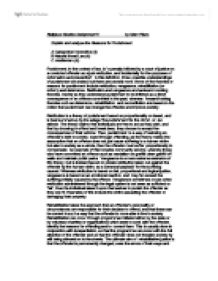 Explain and analyse the Reasons for Punishment.

Religious Studies Assignment 6 by Marc Piano Explain and analyse the Reasons for Punishment A Categorical Imperative (4) B Natural Moral Law (4) C Intuitionism (4) Punishment, in the context of law, is "a penalty inflicted by a court of justice on a convicted offender as a just retribution, and incidentally for the purposes of reformation and prevention". In this definition, three possible understandings of punishment are stated, but there are several more. Some of the theories or reasons for punishment include retribution, vengeance, rehabilitation (or reform) and deterrence. Retribution and vengeance are backward-looking theories, insofar as they understand punishment to be inflicted as a direct consequence of an offence committed in the past, whereas forward-looking theories such as deterrence, rehabilitation and reconciliation are based on the notion that punishment can change the offender and improve society. Retribution is a theory of punishment based on proportionality or desert, and is best summed up by the adage 'the punishment fits the crime', or lex talionis. The theory claims that individuals are free to act as they wish, and that by choosing to offend and break laws, they choose to accept the consequences of their actions. Thus, punishment is a way of restoring an offender's debt to society, owed through offending, as the theory makes the assumption that an offence does not just cause suffering to a human victim but also to society as a whole, thus the offender must suffer proportionally to compensate. ...read more.

However, career criminals or those who offend to survive either do not believe they will be caught or are prepared to chance and endure the punishments arising from committing such an offence, either because they offend for a living or offend to survive. No matter how harsh punishments may be, those who are determined enough to offend will not be deterred. For example, people who steal food to survive are prepared to risk incarceration as they will die if they do not commit the offence. The advantages and disadvantages of the theories of punishment above show that one system on its own cannot fully encompass the administration of punishment necessary to operate a legal system. Many countries, including the UK, operate a hybrid system, whereby retributive theory operates in conjunction with rehabilitation, so that whilst offenders are suffering through deprivation of liberty and/or remuneration, they are also undergoing rehabilitative programmes so that when they have finished their sentence they have been both punished and reformed so that they are better citizens. Vengeance theory is generally not employed by legal systems, as examples of vigilantism in the UK following the publication of the names and addresses of paedophiles shows the vicious and primal nature of uncontrolled emotion when manifested into a thirst for revenge. a. Categorical Imperative Kant's approach to justice is based on his theories of respect and of behaviour according to the Categorical Imperative. ...read more.

Something is right if it leads to something good, and the definition of good, and thus the definition of a good action, is known innately but is not describable. Intuitionists argue that the norms that seem self-evident to us; should be taught by personal example, verbal instruction, praise and blame, and reward and punishment. The extent and appropriateness of punishment is also innately known and understood, which also implies an innate sense of proportion as well, thus people intuitively know that it is 'over the top', for example, to sentence someone to death for the theft of an apple, whereas a long prison sentence or execution for the crime premeditated murder is 'right'. Intuitionists argue that as people 'know' what is right or wrong, most people 'know' and thus choose to break the law, and thus bring punishment upon themselves, subscribing to the retributive theory of justice. Whilst some people may have a different sense of right or wrong, this is discounted as the vast majority of people will intuitively know an action is wrong, and thus it is wrong, even if a few people believe it to be right. However, one of the problems with intuitionism occurs if the society, and thus the moral values, are themselves intrinsically wrong, if, for example, they were to be viewed by an external society. If, for example, we live in a n**i society, and n**i norms seem self-evident to us, then Intuitionists would still argue that n**i norms and intuitions should be taught to our children. ...read more.