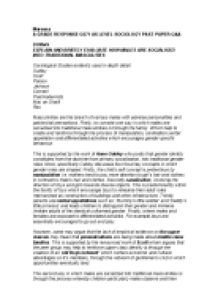 Explain and evaluate how males are socialised into traditional masculinities.

﻿Mareena A GRADE RESPONSE G671 AS LEVEL SOCIOLOGY PAST PAPER Q&A 24 Mark EXPLAIN AND BRIEFLY EVALUATE HOW MALES ARE SOCIALISED INTO TRADITIONAL MASCULITIES Sociological Studies evidently used in depth detail: Oakley Scott Parson Jackson Connell Postmodernists Mac an Ghaill Rex Masculinities are the branch of various males with adverse personalities and patriarchal perceptions. Firstly, to connote one way in which males are socialized into traditional masculinities is through the family. Whom help to create and reinforce through the process of manipulation, canilisation,verbal appellation and differentiated activities which encourages gender specific behaviour. This is supported by the work of Anne Oakley who posits that gender identity constitutes from the doctrine from primary socialization, into traditional gender roles. More, specifically Oakley discusses four focal key concepts in which gender roles are shaped. Firstly, the child?s self concept is pretentious by manipulation i.e. mothers tend to pay more attention to girl?s hair and clothes in contrast to male?s hair and clothes. ...read more.

Women on the other hand, take on the ?Expressive role? take on the nurturing tasks of caring for their family homes and the emotional life of the family. This behaviour is then imitated/implemented on their offspring. On the other hand, the concept of this may be quashed by Parson?s work through the agency of workplace which may help to reinforce masculine identity is by masculinsing manual work. This is supported by the work of Jackson. Who explores that unskilled & semi-skilled manual jobs are usually illustrated as ? macho jobs?. Males reflect traditional male working class identities. However, more recently their disappearance has these identities left uncertain and threatened. , Working class respond to this behaviour and turn to the concept of ?laddish behaviour?. The Third way in which males are socialized into traditional masculities is that the media may assist to reinforce masculine identity is by repeatedly representing hegemonic masculinity in adverts, soaps and films. ...read more.

Mac an Ghaill argue that this crisis has been the development of a variety of exaggerated masculinities such as ?macho lads? who defined their masculine identities via a particularly symbolic display of working class masculinity; which is through ? the tree F?s ? fighting, f*****g and football?. However Rex who is the underlying preposition of ethnic identity, who argues his composition through the agency of the workplace. Rex argues that the workplace may help to reinforce the process of hybridization in which workers may adopt themselves into dominant culture in order to avoid r****m and discrimination. In conclusion, Although there are various agencies of socialization that predicate and create and reinforce males into traditional masculinities, through differentiated activities for gender specific roles. Nevertheless, one must take into account that there are other agencies of socialization that are defiant to the traditional masculities attire and may complacent, of hybridizing their identity, through the pick and mix attitude, the altitude of traditional masculinity is no longer sustaining however, a downfallen idea to new upcoming identities. ...read more.