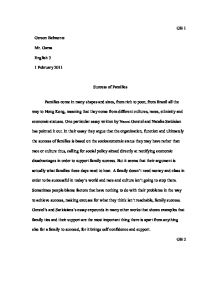 Families come in many shapes and sizes, from rich to poor, from Brazil all the way to Hong Kong, meaning that they come from different cultures, races, ethnicity and economic statuses. One particular essay written by Naomi Gerstel and Natalia Sarkisian ha

GB 1 Gerson Belmonte Mr. Garza English 3 1 February 2011 Success of Families Families come in many shapes and sizes, from rich to poor, from Brazil all the way to Hong Kong, meaning that they come from different cultures, races, ethnicity and economic statuses. One particular essay written by Naomi Gerstel and Natalia Sarkisian has pointed it out. In their essay they argue that the organization, function and ultimately the success of families is based on the socioeconomic status they may have rather than race or culture thus, calling for social policy aimed directly at rectifying economic disadvantages in order to support family success. But it seems that their argument is actually what families these days need to hear. A family doesn't need money and class in order to be successful in today's world and race and culture isn't going to stop them. Sometimes people blame factors that have nothing to do with their problems in the way to achieve success, making excuses for what they think isn't reachable, family success. Gerstel's and Sarkisians's essay expounds in many other works that shows examples that family ties and their support are the most important thing there is apart from anything else for a family to succeed, for it brings self confidence and support. ...read more.

Strong family ties really help when a member of a family needs it. And they can overcome and fight even in the times of most adversity. Family ties can shape people by the values and things they may learn from each other. Something like this would be what happened in France for example. Saint-Domingue planter Aim�-Benjamin Fleuriau left colonialism behind when he returned to his hometown La Rochelle: he literally brought some of the problems he had with him. Five of his mixed-race children by his GB 3 past slave Jeanne arrived with or soon after their white father. "The very existence of this family brought many problems to the relation between blackness and slavery" (Palmer), and for both him and his children, family ties shaped their experience of race and status. In a way, this brought growing racial paranoia in France and legislation ended up regulating all people of color. But Fleuriau and his daughter, Marie-Jeanne, ended up being a privileged family over race, "..as a means of carving out a position of autonomy for themselves in French society..." ...read more.

But success in America is almost unreachable and the so called "American dream" an actual dream to everyone that doesn't have a 100 thousand yearly income. Family success is reachable for everybody that wants to achieve something in order to get their family out to a better start than what the parents had. It doesn't matter if people are Asian, Mexican or French, if they come from a culture where they must get the highest grades to bring honor to a family or not, but the ties and relations people have with their families. Let's say a million dollar family business goes wrong and they lose everything, they all start getting a piece of each other and end up alone and bitter. They have no one to turn because their family ties were weak and revolved around something as corrupt as money. Family ties are the most important things a family must have in order to achieve a level of success, no matter from where there are, from what race or culture they are. Every American family has the capacity of being successful and it's not as hard and impossible as American society portrays it, with big houses, fancy cars or money. All that is needed to achieve success within a family is the family ties. ...read more.