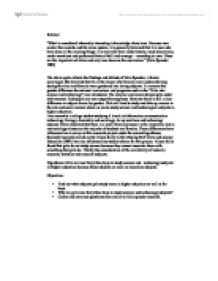 Find out what subjects girls study more in higher education as well as for boys. Why are girls less likely then boys to study science and technology subjects? Create and carry out questionnaires similar to Dale spender research.

Rational "What is considered inherently interesting is knowledge about men. Because men control the records, and the value system, it is generally believed that it is men who have done all the exciting things: it is men who have made history, made discoveries, made inventions and performed feats of skill and courage - according to men. These are the important activities and only men become the curriculum." (Dale Spender 1982) The above quite reflects the findings and attitude of Dale Spender, a female sociologist. She believed that his is the reason why females were underachieving during this time and females were gendered into caring subjects. To remove this gender difference the national curriculum, and programs such as the "Girls into science and technology" was introduced. The national curriculum helped girls under achievement. Today girls are now outperforming boys. However there is still a clear difference in subject choice by gender. Girls still tend to study and take up careers in the arts and social science where as males study science and technological subjects in higher education. I am currently a college student studying A levels in Information communication technology, biology, chemistry and sociology. In my scin3ece and technology subjects I have observed that there is a small female presence in the classroom, but in my sociology classroom the majority of students are females. These differences have influenced me to carry out this research project under the current hypotheses. Secondly research carried out by Alison Kelly in the Missing Half: Girls and science Education (1981) has also influenced my subject choice for this project. Alison Kelly found that girls do not study science because they cannot associate them with something that girls do. Thirdly the consideration of the availability of material, research, statistics and research subjects. Hypothesis: Girls are less likely then boys to study science and technology subjects in Higher education because these subjects are seen as masculine subjects. ...read more.

It appears that there are more girls then it actually appears to be studying science subjects such as chemistry and in particular biology. Physics tends to have fewer girls or no girls at all. From figure 3.12 physics and computer studies and maths have very little female presence. In conclusion from my questionnaire two reasons why females did not take up science subjects were that girls view science and technology subjects as being very hard and not course related. Due to the fact that girls are not going into careers that require these science and technology subjects they do not take them. Therefore this suggests that the career choice affects the subjects taken. And the career choice is affected by gender socialisation in the home and education system. Colley concludes that subject choice continues to reflect: "adult male and female social roles and the abilities and attributes assigned to males and females on the bias of these roles in the gender stereotypes of academic subject areas. The information contained in these stereotypes is acquired during socialisation and reinforced by prevailing beliefs, observations of the status quo and educational practices which themselves are influenced by the same stereotypes." Figure 3.12 GCE A level or equivalent entries for young people1: by selected subject, 2001/02 United Kingdom Percentages Males Females 1 Pupils in schools and students in further education institutions aged 16-18 at the start of the academic year in England and in Northern Ireland, and aged 17 in Wales. Pupils in Scotland generally sit Highers one year earlier and the figures relate to the result of pupils in Year S5/S6. 2 England and Wales only. Source: Department for Education and Skills; National Assembly for Wales; Scottish Executive; Northern Ireland Department of Education If more time were allotted I would have conducted my research on a larger area such as interviewing students from different colleges. I would have also liked to look into the home as well. I wanted to conduct observations or carry out interviews to see what affect the home played on subject choice for girls. ...read more.