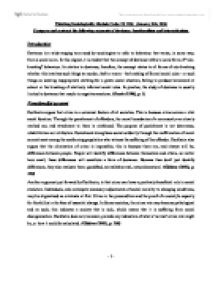 Functionalist accountDurkheim argues that crime is a universal feature of all societies. This is because crime serves a vital social function. Through the punishment of offenders, the moral boundaries of a community

Introduction Deviance is a wide-ranging term used by sociologists to refer to behaviour that varies, in some way, from a social norm. In this respect, it is evident that the concept of deviance refers to some form of "rule-breaking" behaviour. In relation to deviance, therefore, the concept relates to all forms of rule-breaking whether this involves such things as murder, theft or arson - the breaking of formal social rules - or such things as wearing inappropriate clothing for a given social situation, failing to produce homework at school or the breaking of relatively informal social rules. In practice, the study of deviance is usually limited to deviance that results in negative sanctions. (Goode (1994), p. 1) Functionalist account Durkheim argues that crime is a universal feature of all societies. This is because crime serves a vital social function. Through the punishment of offenders, the moral boundaries of a community are clearly marked out, and attachment to them is reinforced. The purpose of punishment is not deterrence, rehabilitation nor retribution. Punishment strengthens social solidarity through the reaffirmation of moral commitment among the conforming population who witness the suffering of the offender. Durkheim also argues that the elimination of crime is impossible; this is because there are, and always will be, differences between people. People will identify differences between themselves and others, no matter how small; these differences will constitute a form of deviance. ...read more.

The subculture becomes a collective response to status denial. For lower stream boys the subculture has two uses: It creates an alternative set of values so they can compete for status among their peers. (Rubington & Weinberg (2004), p.16) It provides a means of hitting back at society. Petty theft or vandalism, for example, may have a measure of malice or revenge within them. Cohen therefore argues that delinquents are no different from other adolescents in seeking status. Cohen thus addresses the second and third of the problems left unresolved by Merton. Criminal subculture: Providing the opportunity for a career in crime. There needed to be a stable, cohesive working class community with contacts in the mainstream and illegal communities, successful role models for the young, and a career structure for aspiring criminals. Conflict subculture: Existing if the criminal subculture is absent. If no criminal career is available to young males they may turn their frustration at failure in both the legitimate and illegitimate opportunity structures into violence. Retreatist subculture: Being the one that takes the double failures, those who don't make it in crime or violence. The failures retreat into drugs and petty theft. The approach has been criticised for making the same assumptions as Merton, that everyone seeks the same goal of financial success. A further problem is that there is no evidence to support the idea of subculture as described by Cloward and Ohlin. ...read more.

The post-institutional experience of many people is stigmatisation and social rejection, particularly in the case of prisons, but also asylums. The deviant is ascribed a negative identity which in many cases is irreversible. (Goode (1994), p.12) Conclusion Clearly, these approaches are working towards sub-cultural explanations of criminal/deviant activity. Chicago sociology directed attention towards the motivations which deviants have. It put forward the idea that there is nothing 'wrong' with deviants, but that they see the world in a different way. They are guided by a distinct set of values. Though this set of values still included the notion of the societal value placed on material success, it did offer some explanation as to why some people but not others become deviant and why some deviance is collective. The first explicit use of the concept of sub-culture is found in the work of Albert Cohen, writing in the mid 1950s (Delinquent Boys, The Culture of The Gang). Cohen was puzzled by the fact that most delinquent acts were not motivated by economic ends, for example, vandalism. His answer was that most delinquents are motivated by status frustration whereby they feel they are looked down upon by the rest of society and denied any status. They therefore develop a distinct set of values or a subculture, which provides them with an alternative means of gaining status, and this possibly leads them into delinquency. ...read more.