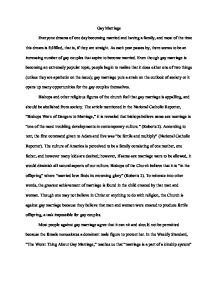 Gay Marriage Everyone dreams of one day becoming married and having a family, and most of the time this dream is fulfilled, that is, if they are straight. As each year passes by, there seems to be an increasing number of gay couples that aspire to become married. Even though gay marriage is becoming an extremely popular topic, people begin to realize that it does either one of two things (unless they are apathetic on the issue); gay marriage puts a strain on the outlook of society or it opens up many opportunities for the gay couples themselves. Bishops and other religious figures of the church feel that gay marriage is appalling, and should be abolished from society. The article mentioned in the National Catholic Reporter, "Bishops Warn of Dangers to Marriage," it is revealed that bishops believe same-s*x marriage is "one of the most troubling developments in contemporary culture." (Roberts 2). According to text, the first command given to Adam and Eve was "be fertile and multiply" (National Catholic Reporter). The culture of America is perceived to be a family consisting of one mother, one father, and however many kids are desired; however, if same-s*x marriage were to be allowed, it would diminish all natural aspects of our culture. Bishops of the Church believe that it is "in the offspring" where "married love finds its crowning glory" (Roberts 2). ...read more.

A great majority of kids growing up in a home with h********l parents find it to do so because they are lacking either a mother or a father, who are both vital participants in childhood. On one Insight on the News interview, a nine year old girl growing up with gay parents reveals her feelings of discomfort at home and how "all of a sudden [she] felt like a different person because [her] mom was a lesbian" (Cameron and Perrin 2). Every marriage between a man and a woman is capable of giving any child that they create or adopt a mother and a father, which is the opposite for gay couples (Gallagher 109). Gay adoption can be a negative part of a child's life because it is usually found to be hard on the child growing up, due to the fact that they lack either a mother or father figure. While a high number of individuals are against gay marriage, there are also the ones who believe everyone should be granted equal rights. America has always been set on the idea of equality for all because "our fathers brought forth this continent, a new nation, conceived in liberty and dedicated to the proposition that all mean are created equal" (Lincoln). Sadly this nation has taken a long time to live up to that promise of equality (Olson 2). ...read more.

In his editorial found on About.com, Tom Head explains that in the countries that have legalized same-s*x marriage, the rate of heterosexual marriage has either "gone up, remained stable, or declined consistent with other countries in the region that do not recognize same-s*x marriage" (Head 1). In other words, gay marriage has absolutely no affect on heterosexual marriage as shown in the statistics of Tom Head's editorial, because the rates of heterosexual marriages stay the same as they would if gay couples didn't exist. Found on the Daily Paul Liberty Forum, Bruce Hausknecht admits that "there is no aspect of family life" that is impacted by a h********l agenda that is "fundamentally at odds with the biblical view of marriage and sexuality" (Hausknecht 1). To recap, there is no family containing heterosexual parents that is impacted by the views of gay marriage; gay marriage isn't harming anyone. An optimistic outlook on gay marriage is the idea of it harming nobody, especially heterosexual marriages, which is a main target in trying to destroy gay marriage. Gay marriage has always been and will continue to be a highly controversial issue among the believers and non-believers. There will always be those people who oppose gay marriage, accepting that male-female marriage was generated to produce fertile offspring. There will also be those who want equality for all. These two beliefs are the basis of the controversy of the issue, and it will continue to be until gay marriage is accepted in society. ?? ?? ?? ?? ...read more.