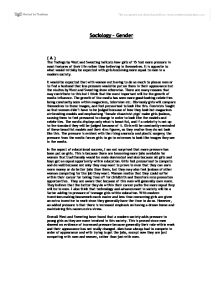 Sociology - Gender ( A ) The findings by West and Sweeting indicate how girls of 15 feel more pressure in most features of their life rather than believing in themselves. It is opposite to what would initially be expected with girls becoming more equal to men in a modern society. It would be expected that with women not having to do as much to please men or to find a husband that less pressure would be put on them in their appearance but the studies by West and Sweeting show otherwise. There are many reasons that may contribute to this but I think that the most important will be the growth of media influence. The growth of the media has seen more good-looking celebrities being constantly seen within magazines, television etc. Obviously girls will compare themselves to these images, and feel pressurised to look like this. Feminists fought so that women didn't have to be judged because of how they look but magazines air-brushing models and emphasising 'female chauvinist pigs' make girls jealous, causing them to feel pressured to change in order to look like the models and celebrities. The media displays only what is beautiful, and if a celebrity is not up to the standard they will be judged because of it. Girls will be constantly reminded of these beautiful models and their slim figures, so they realise they do not look like this. ...read more.

Children also learn about the gender expectations from watching their parents and through the form of manipulation. Manipulation is how children know how to act into the role of their s*x, learning how certain things may not be acceptable to a certain gender. This could, for example, be how a parent will discourage a girl to fight more than they would so a boy. Throughout growing up a youngster will see the way parents act around the house. They will see what is considered acceptable and learn the gender roles from these attitudes and behaviours. This may be jobs that are done around the house; females typically doing cleaning and men doing manual work. Although I think that in a modern society many of the household chores are shared and the children may not see this gender division as much now. Chodorow's studies believe that since boys and girls are naturally different they will be treated different by the mother; when a son notices that they have differences to the mother they can only form their identity on not being the mother. This is why boys sometimes reject what could be considered feminine qualities, because they believe that it is unlike what they are. In secondary stages, the media, peer groups and education all affect gender roles. Within the media most things are aimed differently for different genders. For example, girls are encouraged to obsess over boys and find a boyfriend, being led into what Angela McRobbie calls a 'world of media romance'. ...read more.

It must not be forgotten that in many aspects our identity is not influenced solely by our gender but by other factors, such as our friends, family, education, media, religion and society. Different family groups are now more acceptable, for example same s*x relationships. A child may be brought up in an all male household or an all female household with different gender stereotypes. An individual is a sum of many factors in their life. Some are outside their control, such as gender, natural ability and upbringing. I believe that gender is still a factor in life and that life choices are still made to a due to a person's s*x. A female is highly unlikely to have the opportunity to be a top professional footballer in the Premier League. Being a women means that her physique limits such opportunities. Football itself is still considered to be a male sport in the UK. In contrast in America, soccer has opened up to become a female sport. This could prove that there is a possibility that many things may still change in the future. Gender is therefore becoming less significant and it could seem that the main factor differentiating the sexes is the body we are born into and the physical differences that come with this. Today an individual does not have to be forced to be a certain s*x; so in a society where our s*x can be changed by science and surgery, how can it really dominate who we are? ...read more.