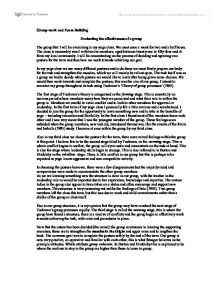 Group-work and Team Building Evaluating the effectiveness of a group The group that I will be examining is my yoga class. We meet once a week for two and a half hours. The class is reasonably small with twelve members, aged between twenty-one to fifty-four and all from my local community. I will be concentrating on the process of deciding and agreeing on a posture for the term and then how we work towards achieving our goal. In my yoga class we use many different postures and to do these we must firstly prepare our body for the task and strengthen the muscles, which we will mainly be reliant upon. The task itself was as a group we had to decide which posture we would like to learn after being given some choices. We would then work towards and complete the posture; this was the aim of our group. I intend to examine my group throughout its task using Tuckman's 'Theory of group processes' (1965). ...read more.

As we are learning something new the structure is clear in our group, with the teacher in the leadership role as would be expected due to her experience, knowledge and expertise. The mature ladies in the group also appear to have taken on a status and often encourage and support new members. This structure is very reassuring not unlike the findings of Bale (1950). Two group members left the class this term, but this was due to work and child commitments rather than a dislike of the group or class itself. Due to our group structure, it is my opinion that the group may have reached the next stage of Tuckman's group processes rapidly. The third stage is called the norming stage, this is where the group have found a structure, there is a resolve of conflicts and the group begin to effectively work towards achieving the task, with roles and procedures in place. Now that the osture has been decided (the camel) ...read more.

I do not believe my group will reach these later stages until next month when the term ends. Also because a new term will start two months after last term I am not sure if the retiring stage will apply, to the extend that I will go my separate way after finishing the task, but many of the women will stay in contact over the break. In conclusion I feel my group is in the performing stage of Tuckman's theory of group processes.I believe this because our group is both constructive and functional although the end task has not yet complete which leads. I feel my group meets the conditions for a mature group established by Kell and Corts (1980) because of the sense of growth particularly and the friendships that have developed within the group. I also noted that the group fits the criteria of a working group which is described in Stangor as "a group consisting of between 3 and 12 individuals who are actively attempting to meet a specific goal". We have twelve members, who all meet once a week and all are working to achieve the same objectives, with the overall goal to learn and participate in yoga. ...read more.