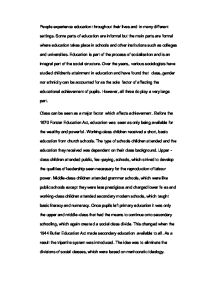 How do the three factors of class, gender and ethnicity affect achievement in education?

People experience education throughout their lives and in many different settings. Some parts of education are informal but the main parts are formal where education takes place in schools and other institutions such as colleges and universities. Education is part of the process of socialisation and is an integral part of the social structure. Over the years, various sociologists have studied children's attainment in education and have found that class, gender nor ethnicity can be accounted for as the sole factor of affecting the educational achievement of pupils. However, all three do play a very large part. Class can be seen as a major factor which affects achievement. Before the 1870 Forster Education Act, education was seen as only being available for the wealthy and powerful. Working-class children received a short, basic education from church schools. The type of schools children attended and the education they received was dependent on their class background. Upper-class children attended public, fee-paying, schools, which strived to develop the qualities of leadership seen necessary for the reproduction of labour power. Middle-class children attended grammar schools, which were like public schools except they were less prestigious and charged lower fees and working-class children attended secondary modern schools, which taught basic literacy and numeracy. Once pupils left primary education it was only the upper and middle-class that had the means to continue onto secondary schooling, which again created a social class divide. ...read more.

Diane Reay found that "it is mothers who are making cultural capital work for their children". She found that the amount of cultural capital possessed by middle-class mothers meant that their children succeeded more in education that their working class peers. Middle-class mothers had the knowledge and skills to help their children more effectively with homework, to challenge the school and negotiate with teachers for the benefit of their children. Middle-class mothers could also afford to have domestic help, giving them more time to spend with their children or to pay for private tutors. Gender has also had a profound affect on achievement. In the past, education was almost always for boys as education for girls was restricted in many ways, which resulted in girls underachieving. Before the National Curriculum, girls tended to study subjects that would prepare them for their future roles as housewives and mothers like textiles and home economics. When the National Curriculum was introduced in 1988, girls were given equal access to all subjects including physics and chemistry. The same applied for boys although boys tended to choose subjects like science and maths. Litch and Dweck found that girls lacked confidence in intellectual tasks and constantly underestimated their ability to achieve. They were not given the encouragement from their teacher to achieve. ...read more.

Fuller carried out a study including African-Caribbean pupils, both boys and girls, to see their reaction to the way they were being labelling by their teachers. African-Caribbean girls rejected the label and tried hard to prove their teachers wrong by succeeding, resulting in the self-fulfilling prophecy. However, African-Caribbean boys rejected schooling altogether and developed anti-school subcultures. His study also showed how the similarities in ethnicity but the differences in gender gave two different outcomes in children's educational achievement. Class can also be closely related with ethnicity, as Bangladeshi, Pakistani and Black children are more likely to be brought up in low-income families where English is not their first language. In some ethnic groups, education is not seen as a high priority. Children are expected the take responsibility in the family home performing household duties, which would leave them little time to spend on homework. Therefore these pupils will subsequently suffer educational disadvantages in line with or worse than those of working-class Whites. As a single factor, whether it is class, gender or ethnicity, achievement in education cannot be accounted for solely. If this where the case, then the only people that would be succeeding in life would be white middle-class boys and white working-class girls as working-class boys are now seen to be underachieving. This example alone shows that one factor cannot be viewed in isolation. ...read more.