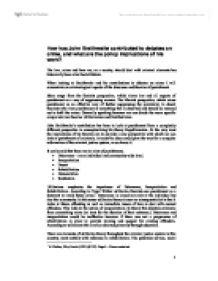 How has John Braithwaite contributed to debates on crime, and what are the policy implications of his work?

How has John Braithwaite contributed to debates on crime, and what are the policy implications of his work? The law, crime and how we, as a society, should deal with criminal elements has historically been a hot bed of debate. When looking at Braithwaite and his contributions to debates on crime I will concentrate on criminological aspects of the discourse and theories of punishment. Ideas range from the feminist perspective, which views law and all aspects of punishment as a way of suppressing women. The Marxist perspective, which views punishment as an effective way of further suppressing the proletariat, to desert theorists who view punishment as something that is deserved and should be metered out to befit the crime. Generally speaking however we can divide the more specific camps into two theories Utilitarianism and Retributivism. John Braithwaite's contribution has been to look at punishment from a completely different perspective in conceptualising his theory Republicanism. At the very least the implications of his theories are to provide a new perspective with which we can look at punishment of criminals. At most his ideas could pave the way for a complete reformation of the criminal justice system, as we know it. It can be said that there are six aims of punishment; * Deterrence - on an individual and community wide level. * Incapacitation * Desert * Rehabilitation * Denunciation * Restitution Utilitarians emphasise the importance of Deterrence, Incapacitation and Rehabilitation. According to Nigel Walker utilitarian theorists see punishment as a deterrent to avoid future crime1. Deterrence is aimed not only at the individual but also the community. In this sense utilitarian theory is seen as consequentialist in that it looks at future offending as well as immediate issues of how to deal with current offenders. ...read more.

It is a tool used to shape moral concepts in society and enable the community to distinguish between right and wrong. This in turn promotes community consensus and cohesion. Denunciatioin if followed by restitution whereby the offender is released back to the community after serving their deserved sentence. Criticisms of retributive theory are as strident as those towards utilitarianism. In relation to desert theory some see its vengeful roots as inappropriate. Some might say uncivilised. Proportinality presents problems too in that Ashworth and Von Hirsh do not elaborate on limits or bounderies that should be considerd when settingm out the poarralel rankings of offence and punishment. We can assume that the offence ladder will be set out in a logical manner but when considering the Cardinal rankings there is not help offerd as to the sentencing gap between offeces, minumum punsihmetns or maximum limits. This means that other principles have to be considerd by thise drawing up the comparanle tables. These new principles may conflict with those of desert. Questions ar erasied as to the fairness of opunishing thos with social problems. This stem from mitgiatiojg circumstances only being considerd at sentencing stage. How do we measure harm and culpability? Since the theory os soley based on these principles we need a way which ensures that these are beingm measuyred fairly, doies such a system exist? Retributivist theory assumes that society operates on siome form of consensus and that this can be furtherd through denunciation in particular. We live in a pluralistic society. Is consensus possible? In addition it is assumed that society en mass understands crime, sentencing, the criminajustice system. There is strong evidence which suggests that communities are confused and contradictory when it comes to their assessment opf crime. ...read more.

criminals negate theier right to certain priviledges. Criticisms aside it is clear that Braithwaites contributions, which strech far beyond republican theory at the very least have broken the norm of looking at punishment from a pessimistic point of view. He has been accused of taking the best parts of utilitarianism and retributivism and molding them into one theory but I think he goes further than that. Yes, there is a strong element of rehabilitation and of deterrence in republicantheory, but any theory which seeks to re-integrate a criminal back into the community must undertake these roles inborder for it to be successful. The policy implication of his theory are largely dependant on dominat political thinking and public perception. On paper republican theory looks very attractive, but in reality it is unlikely that a governbemtn, or a community is going to be ready to instigate it. When it comes to punishment it can be said that we are still driven by vengeful attitudes. However, there is no reason why elements of braithwaites theory should not be included in the criminal justice system today and they could possibly have a very positive effect in areas he has looked at such as juvinille, diomestic violence, drink driving and white collare crime. We should not close the door to his nption of re-integrative shaming companies cannot perform without the support of communities and except for the minority who wants to feel the wrath of their families and the community? 1 N. Walker, Why Punish (1991) (OUP). Page 6 - Course materials 2 D. Reily 3 J. Braithwaite, Reducing the Crime Problem: A Not So Dismal Crimonology (Course Materials), pg 49. 4 J. Braithwaite, Not just Desert, 1990. 5 A.Ashworth and A Von Hirsh (1992). Not Not Just Deserts. Oxford Journal of Legal Studies vol 12 no 1 (course materials) ?? ?? ?? ?? 1 ...read more.