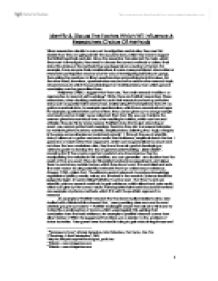 Identify &amp; Discuss The Factors Which Will Influence A Researchers Choice Of Methods

Identify & Discuss The Factors Which Will Influence A Researchers Choice Of Methods When researchers decide to carry out investigations and studies, they must first decide how they are going obtain the accurate data, which they need to support their initial hypothesis and aim. Once the researcher has selected the topic, which they want to investigate, they need to choose the correct methods to collect their data. The choice of the methods they use depends on a number of factors. For example, there are practical considerations, in some cases participant observation or researcher participation may be a better way of investigating behaviour in gangs, than asking the members to fill out questionnaires and participate in interviews. On the other hand, interviews, questionnaires may be better used in other research topic circumstances, in which they provide important statistical data, from which general conclusions can be generalised from. Halfpenny (1984)1, suggests that there are, 'Two main research traditions or approaches to research with sociology". Firstly, there are Positivist researchers. These researchers, when deciding methods to use in their research use hard quantitative data, such as questionnaires and surveys, mainly using first hand primary data. They gather numerical data, for example questionnaires, which have several advantages. ...read more.

Positivist sociologists would then ask why this is and try to identify a small number of factors, which would explain this, gaining their conclusions from the hard evidence. An example of positivist research comes from Albert Cohen (1998)5. He suggested that Crime was a solution to the problem of status frustration. Young men were frustrated in trying to gain status in legal ways and therefore by becoming delinquents and engaging in unsocial activities, they achieved a certain kind of higher status within their peers. By doing this, he could see cause and effect and determine casual relations. However there are many disadvantages to using scientific methods, mainly concerning ethics and the fact that if the evidence is gained from, say a laboratory experiment, then how far can you generalise it to outside life and everyday social interactions? Another sociological approach comes from sociologists known as Interprevists. These researchers prefer to understand human behaviour by seeing the world through the eyes of those being studied. They believed that people give meaning to their own behaviour and to the behaviour of others. Therefore to understand their behaviour, you have to discover and interpret the meanings, which give their actions. ...read more.

For example road accidents are rarely seen as suicides, while drownings, hangings and drug overdoses are more likely to be put down as suicides. Therefore, this shows that you cannot generalise completely. There may be circumstances. By using official data, like Positivists do, you just generalise to one situation, you are not allowing any other conclusions to come from it, there may be exceptions, such as a road accident could have been intended rather than just an accident. The interpretivist views allow us to see all aspects of a circumstance and generalise all to conclusions, instead of having one preset idea. By having a preset idea, the world does not work in that way, society has exceptions, so you should not collectively generalise situations. Societies are all different, so are individuals, so they should allow their owning meanings of situations to be put across. It is said that, 'qualitative research has traditionally been used predominantly in the Social sciences such as in Sociology' Denzin & Lincoln (1994).9 In conclusion, there are many different viewpoints on how researchers should choose their methods when studying a topic. While both sides have their pro's and cons, either way can be used. Some circumstances call for one type of view to be used, for example Positivists, while another may need an Interpretivist viewpoint. Maybe a combination of the both can allow better results (triangulation). ...read more.