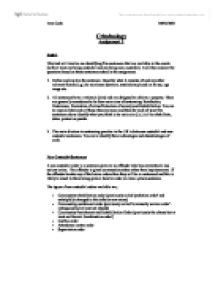 Identify five sentences that are available to the courts.

Criminology Assignment 2 Task 1 This task will involve me identifying five sentences that are available to the courts (with at least one being custodial and one being non-custodial). I will then answer the questions based on these sentences asked in the assignment. 1. Define and explain the sentence. Describe what it consists of and any other relevant factors (e.g.) its maximum duration, restrictions placed on its use, age range etc. 2. All sentences have a rationale (aim) and are designed to achieve a purpose. There are generally considered to be four main aims of sentencing: Retribution, Deterrence, Prevention of crime/Protection of society and Rehabilitation. You are to explain what each of these theories mean and then for each of your five sentences above identify what you think is its main aim (i.e.) is it to rehabilitate, deter, protect or punish. 3. The main division in sentencing practice in the UK is between custodial and non- custodial sentences. You are to identify three advantages and disadvantages of each. Non-Custodial Sentences A non custodial order is a sentence given to an offender who has committed a less serious crime. The offender is given community orders rather than imprisonment. If the offender breaks any of the below orders then they will be re-sentenced and this is likely to result in them being given a heavier order or even a prison sentence. The types of non custodial orders available are; * Community rehabilitation order (previously called 'probation order' and unhelpfully changed to this inferior new name) * Community punishment order (previously called 'community service order' - ambiguous but at least not absurd) * Community Punishment and Rehabilitation Order (previously the obtuse but at least not farcical 'combination order') ...read more.

This involves the prevention of illegal items/substances passing into the UK from foreign countries. Types of crime which are prevented here are drug smuggling and illegal alcohol and tobacco imports. I have shown an example of how customs prevent crime by including an article regarding illegal meat imports (see appendix 1) This is what the official HM Customs and Excise site had to say about themselves as a public service "Excellence in public service" "Like all Government organisations, we are committed to continually improving the quality of service we provide. We do this by stating clearly the levels of service you should be able to expect, and through a Public Service Agreement which, among other things, aims to make it as easy as possible for individuals and businesses to understand and comply with their obligations. We are a multi-winner of the Government sponsored Charter Mark scheme and are committed to achieving and maintaining the high levels of service the Charter Mark sets out." (http://www.hmce.gov.uk/about/excellence/excellence.htm) One of the most successful strategies that has been used by Customs is to use dogs to detect various different substances which may be illegal. Drugs have been the main illegal substance in which the detector dogs have had the most success. For a full description of the detector dogs (see appendix 2). I think that the use of detector dogs in airports and ports have been a very successful ways of preventing illegal substances being brought into the UK. Unlike us a detector dog is able to detect someone who maybe carrying an illegal substance and will be able to bring it to the attention of the people working with the dog. Figures show that detector dogs have been priceless asset to HM Customs and Excise and unlike modern technology they are not at a stupidly high price. ...read more.