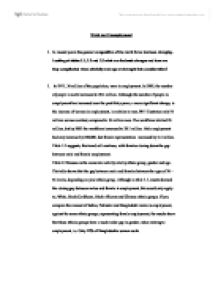 In recent years the gender composition of the work force has been changing. Looking at tables 1.1, 1.2 and 1.3 what are the basic changes and how are they complicated when ethnicity and age are brought into consideration?

Work and Unemployment 1. In recent years the gender composition of the work force has been changing. Looking at tables 1.1, 1.2 and 1.3 what are the basic changes and how are they complicated when ethnicity and age are brought into consideration? 1. In 1971, 26 million of the population, were in employment. In 2001, the number of people in work increased to 29.4 million. Although the number of people in empolyment has increased over the past thirty years, a more significant change, is the increase of women in employment, in relation to men.1971 illustrates only 10 million women worked, compared to 16 million men. The workforce totalled 26 million, but by 2001 the workforce increased to 29.1 million. Male employment had only increase by 200,000, but female representation increased by 2.4 million. Table 1.1 suggests, this trend will continue, with females closing down the gap between male and female employment. Table1.2 focuses on the economic activity rate by ethnic group, gender and age. The table shows that the gap between male and females between the ages of 16 - 64 varies, depending on your ethnic group. Although in table 1.1, results showed the closing gap between males and female in employment, this would only apply to; White, Black Caribbean, Black Africans and Chinese ethnic groups. If you compare the amount of Indian, Pakisatni and Bangladeshi males in employment, against the same ethnic groups, representing female employment, the results show that these ethinic groups have a much wider gap in gender, when relating to employment, i.e. ...read more.

This complicates the picture for an overall fall in unemployment because circumstances differ depending on what type of household you live in and what type of occupation is being looked for. 4. What does table 4 indicate about changes in the numbers of males and females in full and part-time employment since 1987? What accounts for these changes? 4. Since 1987 to 2002 there has been a increase of people in empolyment in every area in both full and part-time occupations reguardless of gender. The greatest increase shown in table 4 is the increase in the amount of women employed in full time work. In 1987 5.5 million women worked full time, this then went on to increase to 6.2 million by the year 2002. Part time employment also sees a steady increase in the female gender. In 1987 4.2 million women worked part-time, by 2002 this figure increased to 5.1 million. The only other significant change is that part-time employment by males has doubled since 1987 from 0.5 million to 1.1 million. After evealuating the evidence I have come to the conclusion that females in part-time and full-time employment are responsible for the overall reduction in unemployment. This could be due to the fact that many of them may never have worked before. Many females were expected to stay at home and care for their childrens and husbands and home needs. ...read more.

Finally looking at promotion opportunities it could be argued that if women are paid less to do the same job, then surely a woman would be more preferable to promote as she would cost less to employ. This is not the case. "Overall, the evidence with respect to the opportunities for promotion for women is that women are less likely to be promoted than men and indeed are concentated in jobs that are less likely to lead to high remuneration and promotion." (Crompton and Sanderson 1990; Evetts, 1994). Women experience both horixontal and vertical labour market segmentation as previously discussed. Furthermore, when an occupation seems to be seen as 'a female one' it will decline in job status. However men will still continue to dominate the senior posts. Evaluating these points has helped me form the conclusion that although working conditions for men and women have grown similar over the past 30 years compared to how they once were, men and women still firmly face diffences in the employment market. Although women's circumstances in employment have started to improve there is still a long way to go and unless the issues discussed above are dealt with then the gendered division in labour will continue preventing any fundemental change in repect of work. Finally in conclusion even if gender inequality was iradicated we would still be faced with problems in areas of age, ethnicity and class, therefore it may be better to address all the areas collectivly rather than individually. ...read more.