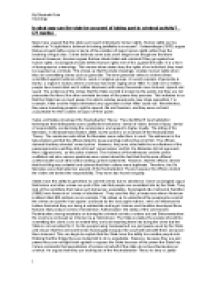 In what way can the state be accused of taking part in criminal activity?

﻿By Elizabeth Dale Sociology In what way can the state be accused of taking part in criminal activity? (21 marks) Many have argued that the state can breach individual?s human rights. Human rights can be defined as ?A right that is believed to belong justifiably to everyone?. Schwendinger (1970) argues that we should define crime in terms of the violation of basic human rights rather than the breaking of legal rules. Cohen believes some acts aren?t illegal even though we find them immoral. However, Herman argues that we should label acts criminal if they go against our human rights. Sociologists should defend human rights even if it is against the state. It is a form of transgressive criminology. This means when states deny the rights of an individual; they must be regarded as criminals. This shows us that the state knowingly, violates human rights when they are committing crimes such as genocide. The term genocide refers to violent crimes committed against national, ethnic, racial or religious groups. A recent example of genocide is Darfur, a region in Sudan, where a civil war has been raging since 1983. ...read more.

However, that the officers denied that the killing was unlawful and claimed that their actions were legitimate. Therefore, the De Menezes case illustrates two aspects of the Neutralisation Theory because the officers denied the victim and denied the responsibility. They were also found not guilty. States have the ability to get others to commit crimes due to obedience. Some sociologists argue that torture and other crimes are part of the role that people are socialized into by the State. They look at the conditions that make such behaviour acceptable. Sociologists like Kelman & Hamilton (1989) have focused on ?crimes of obedience?. They used the My Lai massacre where American soldiers killed 400 civilians as an example. This allows us to understand the people who commit the crimes are just the ?bad apples? produced by the ?bad apple makers?, who are influenced to believe that what they are doing is admissible and legal. Kelman and Hamilton developed three features that produce crimes of obedience: Authorisation: the status of the commander, Routinisation: strong emphasis on turning the criminal act into a routine act and Dehumanisation: the enemy is portrayed as inhuman (e.g. ...read more.

Governments have the power and resources to cover up such activities and can actually control the flow of information and especially the media by issuing legal instructions to prevent journalists from speaking about state crimes in the ?public interest?. State crime is clearly an area of interest to Marxist sociologists, who generally see the government as controlled or at least heavily influenced, by the bourgeoisie. War crimes can be committed by individuals, groups and the state. They are punishable offences under international law. War crimes committed by the state include directing attacks against civilians, torture or inhumane treatment of prisoners, taking hostages, using civilians as shields, using child soldiers, and settlement of an occupied territory. For example a strong argument has been made by International Human Rights lawyers that those held by the American government in Guantanamo have been subject to torture and inhuman treatment in order to extract information. Methods used by the Americans include ?Waterboarding?, which breaches international standards for human rights. Recent war trials include Saddam Hussein, who was found guilty by an Iraqi court and then hanged. It is problematic and controversial to decide what a war crime is and who is a war criminal. ...read more.