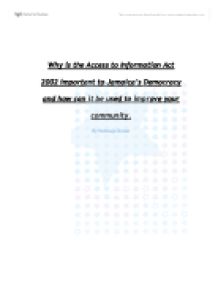 Why is the Access to Information Act 2002 important to Jamaica's Democracy and how can it be used to improve your community. By Natassja Douse Information: The Currency of Democracy An eminent government without the means of acquiring or providing information is only an introduction to a travesty or tragedy or perhaps both. For that reason it is imperative that the free flow of information is endorsed by the political authority of a country. According to Thomas Jefferson, "Information is the currency of democracy." Democracy is the free and equal right of every person to participate in a system of government, often practiced by electing representatives of the people by the majority of the people. In other words freedom of information is key to a democratic system of government. Jamaica is the trailblazer in the region on access to information as it is fundamental in maintaining and enhancing the country's democracy. In passing and implementing the Information Act 2002, Jamaica has established an innovative and more unrestricted form of governance and has achieved what other Caribbean countries are still attempting. ...read more.

The Access to Information Act 2002, is therefore vital to Jamaica's democracy, because a government's strength is determined by how much the people feel apart of it, hence the availability of information is a movement towards strengthening the government. Benjamin Disraeli once said that the person who has the most access to information will have the greatest success in life. There is truth in this statement as The Access to Information Act 2002 was implemented with the objective of improving the Jamaican communities and society at large and this is definitely a step taken on the path to a successful government. Many communities are therefore able to profit from this enactment. Access to public documents can assist members of a community or the general community in exercising their other basic human rights, such as their right to suitable health care, housing, education and a clean and healthy environment. The Act is a means of fostering transparency thus preventing corruption and backdoor deals. In Jamaica's quest to combat corruption The Act ensures that public officials are held accountable for acts considered to be criminal; by doing so it guarantees that all persons enjoy equal access to justice. ...read more.

These are just a few of the many examples of how the Access to Information Act 2002 can be used to improve a community. Many of the efforts in Jamaica to promote freedom of information serve as a model for other jurisdictions in other Caribbean countries. It is therefore obvious that the Jamaican Government and its public authorities have made great progress in the implementation of the Act. As a democratic country, the government understands the importance of free flow of information so that the citizens can participate more fully in public matters such as influencing the decision-making process in matters that will aid in nation-building. Clearly, the government is adhering to the Universal Declaration of Human Rights, Article 19, which states that everyone has the right ..... to seek, receive and impart information and ideas....." Our country has recognized the role that the access to information can play in safeguarding civil-political and socio-economic rights, improving communities and in rebuilding trust between a government and its citizens. ...read more.