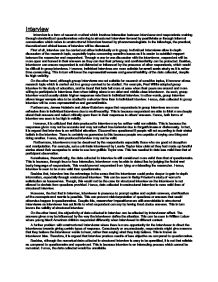 Interview Interview is a form of research method which involves interaction between interviewer and respondents working through standardized questionnaires referring to structured interview favored by positivists or through informal conversation which refers to unstructured interview favored by phenomenologists. In the followings, the practical, theoretical and ethical issues of interview will be discussed. First of all, interview can be carried out either individually or in group. Individual interviews allow in-depth discussion of the research topic, especially topics concerning sensitive issues as it is easier to establish rapport between the researcher and respondent. Through a one-to-one discussion with the interviewer, respondent will be more open and honest in their answers as they can feel their privacy and confidentiality can be protected. Besides, interviewer can ensure respondent is not distracted or influenced by the presence of other respondents, which would be difficult in group interviews. However, individual interviews are more suitable for small scale study as it is rather time consuming. This in turn will lower the representativeness and generalizability of the data collected, despite its high validity. ...read more.

Hence, generalization and representativeness of data collected in interview are more justified. Even so, interview has the practical disadvantage of language barriers. Although this can be solved by hiring trained interviewer, it would be rather costly. In addtion, interview has less ethical issue than experiment or covert participation as consent is usually obtained before the interview can take place. Confidentiality and privacy of the interviews can also be protected. Informed consent from participant would also prevent misleading the participant of the nature of research. Unlike covert participant observation, both interviewer and respondent are unlikely to be harm or placed in danger in interview as respondent is aware of interviewer identity and purpose. Hence, interview is seen as a rather ethical research method. Withal, interview produces results which are less valid than participant observation but more valid and less reliable than questionnaire and experiment. Although interview tends to be limited to small scale study which has low representativeness and generalizability, interview is useful to study attitudes and emotions which cannot be observed directly. These limitations can be overcome by using method triangulation by Norman, which allows crosschecks of finding produced by other method, as to increase the validity and reliability of the findings. ...read more.