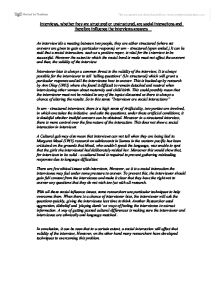 Interviews, whether they are structured or unstructured, are social interactions and therefore influence the interviews answers

An interview ids a meeting between two people, they are either structured (where set answers are given to gain a particular response) or urn - structured (open ended.) It can be said that a social interaction; such as a positive roper, is vital for the interview to be successful. However the extent to which the social bond is made must not affect the answers and thus, the validity of the interview. Interviewer bias is always a common threat to the validity of the interview, It is always possible for the interviewer to tell 'telling questions' (Un structured) which will grant a particular response and tell the interviewee how to answer. This is backed up by research by Ann Okay (1982) ...read more.

However in a structured interview, there is more control over the fine nature of the interaction. This does not show a social interaction in interviews. A Cultural gab may also mean that interviews can not tell when they are being lied to. Margaret Mead (1943) research on adolescents in Samoa in the western pacific has been criticized on the grounds that Mead, who couldn't speak the language, was unable to spot that the girls she interviewed had deliberately misled her. Moreover this would show that, for interviews to be valid - a cultural bond is required to prevent gathering misleading responses due to language difficulties. ...read more.