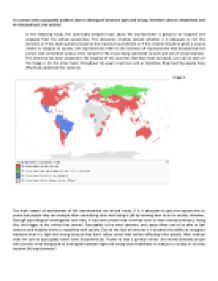 Is a person with psycopathy problem able to distinguish between right and wrong, therefore able to rehabilitate and be released back into society?

﻿Is a person with psycopathy problem able to distinguish between right and wrong, therefore able to rehabilitate and be released back into society? In the following essay, the continually debated topic about life imprisonment is going to be exposed and analyzed from the ethical perspective. The discussion revolves around whether it is adequate or not this sentence or if the death penalty should be the maximum punishment or if the criminal should be given a second chance to readjust to society. Life imprisonment refers to the sentence of imprisonment that dictates that the person who committed serious crime remain for life in jail, being submitted to work and lack of social relations. This sentence has been accepted in the majority of the countries that have been surveyed, as it can be seen on the Image 1. On the other hand, throughout the years countries such as Colombia, Brazil and Venezuela have effectively abolished this sentence. Image 1. The main reason of abolishment of life imprisonment are ethical issues, if it is adequate to give the opportunity to prove that people they can readjust after committing crime and being in jail by knowing how to act in society. ...read more.

Tribes at south of Australia dictates that one of the requirements to become a man who is worth to be named a hunter they need to have their first s****l intercourse at age of fifteen, something that is taken as a bad thing in cities as Cali. Another example of the variety of conceptions is the way Ancient Greeks give credit to their Gods for the murders they committed at war and that way of thinking have been transmitted from generation through generation in some families, and because it is taken as work of God murder is sometimes conceived as something right. Nevertheless, criminals such as s****l abusers and paedophiles, have a psychological disorder that don?t let them distinguish between what is defined to be right and wrong due to the perceptive disorders they have, supported by the way they were raised by their parents that are taken as one of the causes people turn into criminals. As it was shown on the interview to Luis Alfredo Garavito made by ?Pirry? for RCN, criminals tend to blame their behaviour to their childhood, the way their parents treat them or their social relations at school. ...read more.

The impulsivity which characterizes the psychopaths could be treated with medication given by a specialist on the field. If the readjusting program is well developed, the criminals with psychopathy have the chance of being able to be accepted in society because they would fit as a normal person able to act with common sense and reason and not guided by impulses. In my opinion, life imprisonment should be applied to mentally diseased people who suffer of psycopathy because their natural instincts are established since they were born and if an event in their life caused them to commit crime it means that their instincts have been released and are the one who guide their way of acting because once they torture or kill someone, the feeling of relief and satisfaction governs their body making them continue their killing, as it happened with Garavito. This makes them create a different way of perceiving life where their porpoise is to continue their killing and, even though they receive treatment it is almost sure that their natural instincts will re-emerge at sometime not being able to live a normal life in society. ...read more.