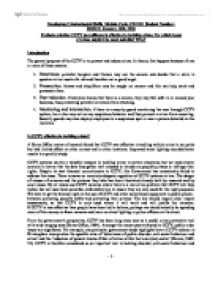 Is CCTV effective in tackling crime?

Introduction The general purpose of the CCTV is to prevent and reduce crime. In theory, this happens because of one or more of these reasons: 1. Deterrence: potential burglars and thieves may see the camera and decide that a store in question is too much of a risk and therefore not a good target. 2. Prosecution: thieves and shoplifters may be caught on camera and this can help catch and prosecute them. 3. Fear reduction: if everyone knows that there is a camera, they may feel safer in or around your business, thus preventing potential criminals from attacking. 4. Monitoring and intervention: if there is a security guard monitoring the area through CCTV system, he or she may act on any suspicious behavior and thus prevent a crime from occurring. Security guards may also deploy employees to a suspicious spot or near a person detected on the monitors. Is CCTV effective in tackling crime? A Home Office review of research found that CCTV was effective in tackling vehicle crime in car parks but had limited effect on other crimes and in other locations. Improved street lighting recorded better results in a parallel study. ...read more.

Such is the appeal of CCTV that the Home Office made �153 million available between 1999 and March 2002 for allocation towards the funding of CCTV schemes (Home Office, 2000). What types of crime? Evaluation indicates surveillance cameras can limit certain types of crime, in particular locations. For example, CCTV cameras work more for property crime than for personal crime. They have been most effective in the following circumstances: 1. Dealing with crimes of dishonesty (theft, burglary/break and enter); 2. Reducing motor vehicle crime; 3. Increasing feelings of safety and security; and 4. In city/town centres where the geographical layout of the town centre is simple and where the extent of camera coverage is high; and when the cameras are linked to a rapid police response. This is obtained by ensuring that information can pass swiftly from CCTV operators to officers on the ground and vice versa. Most arrests are made when the system is used to coordinate timely responses to incidents as they occur. Effectiveness peaks when there is a high level of local publicity about video-assisted arrests. Attempting to use recorded information to identify suspects retrospectively is more time consuming and less effective. ...read more.