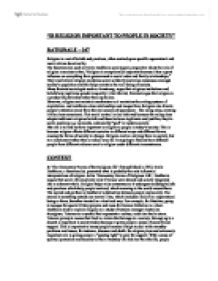 Is Religion Important to people in society

"IS RELIGION IMPORTANT TO PEOPLE IN SOCIETY" RATIONALE - 247 Religion is a set of beliefs and practices, often centred upon specific supernatural and moral claims about reality. The functionalist, such as Emile Durkhiem sociological perspective about the role of religion in society is that; "Religion is exceptionally important because it has a great influence on everything from government to social order and family relationships." They also believe religion maintains social solidarity and value consensus amongst society's population and this helps maintain the well-being of society. Many feminist sociologist such as Armstrong, argue that religious institutions and beliefs help legitimise gender inequality. Like Marxist, feminist argue that religion is a product of patriarchy rather than capitalism. However, religion can maintain mechanism as it maintains the exiting system of exploitation, and reinforces class relationships and inequalities; Religion also diverts people's attention away from the real sources of oppression - the ruling class, creating a false class conscience. This social control is also achieved because the ruling class adopts traditional religious beliefs and these believes legitimate and justifies, they're social positions e.g. monarchs, ordained by "god" in modern society. My aim is to find out how important is religion to people in today's society. ...read more.

METHODOLOGY Based on my topic, I have decided to choose unstructured interview as my main method and am going to use quantitative data, which would help me understand the meanings of peoples view and responses as it is relevant to my aim. I would also compare the answers that I am given in order to see how religion affects society. Unlike questionnaire where I cannot really find out more about the interviewee because the answers are likely to be determined and similar and it's going to be straight forward. I prefer to use interview to find out about my research rather than questionnaire or all the other methods. This is because with interview I would be able to get an in depth detail about what I want to find out and also it would give me the opportunity to learn about peoples believes from different faiths and backgrounds. Also I prefer it because it would make my research more valid and reliable, as I would be talking to the person directly. This would give me the advantage to be able to read their body language in order for me to know if the information that is given is the truth. The possible problem that could happen during this interview is that I could not be given reliable information if the interviewee ...read more.

I thought most of these mistakes came because some of my interviews were done in a rush and there could have been a possibility that most of my interviews did not even think about the questions they were being asked and then gave a straight answers. So because of these results I prepared another interview questions, but used a more leading questions which would reduce the lack of reliability and validity. This time they were structured to see if the answers that I received would be a bit similar to what I have done first. I also used the structured interview because I wanted to help the interview with some little answers just in case they might not know what I am talking about. So after my second interviews I collected the information and then put them together. But it was difficult for me to gather all the information I had and also pick out necessary information. After putting together and analyzing my results, I realized some minor problems with my results. This could have been because of my two different interviews. One of the problems which affected my results might have been the invalid I was given in my first interviews and also the fact that I had to change ...read more.