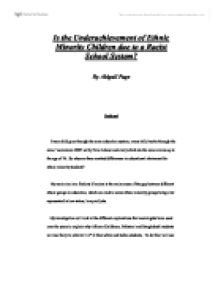 Is the Underachievement of Ethnic Minority Children due to a Racist School System?

Is the Underachievement of Ethnic Minority Children due to a Racist School System? By Abigail Page Rational Every child goes through the same education system, every child works through the same 'curriculum 2000' set by New Labour and every child sits the same exams up to the age of 16. So why are there marked differences in educational attainment for ethnic minority students? My main aim is to find out if racism is the main cause of the gap between different ethnic groups in education, which can lead to some ethnic minority groups being over represented in low-status, low paid jobs. My investigation will look at the different explanations that sociologists have used over the years to explain why African-Caribbean, Pakistani and Bangladeshi students are less likely to achieve 5 A*-C than white and Indian students. To do this I will use secondary evidence, statistics and studies to show the traditional and more modern explanations for the ever-widening dissonance between ethnic groups. My primary research will be done by using informal interviews with members of the Norfolk and Norwich national equality council. This will help me find out what the situation is like in Norfolk, and if people believe that the underachievement of some ethnic groups is due to reasons such as cultural deprivation or institutional racism. Also I would like to see if the situation has changed much over time, therefore I will be using more dated research on top of more recent research. I also hope that there may be a snowball effect once I interview one group as they may suggest other people who are involved in racial equality of education within Norfolk. Of course it is a much wider issue than what is just happening in my home city, yet for practical reasons I feel that I will only have time to focus on one area. Yet I can do a comparison with the rest of Britain by using other sociologist research on the topic, and see how much mine and theirs vary. ...read more.

This is because the institutions in Norfolk are denying that there is a problem, and because of this they are not introducing the policies and programmes needed to help Black and Indian minority children in education. It has taken many years for the education system in Norfolk to have an anti-racist policy. Un top of this teachers often don't know much about racism, how to recognise it and how to deal with it, and this leaves the child with no one to talk to. This means that ethnic minority children in schools in Norfolk have it harder because there is racism in the system, and there are not many help lines for them to use when they experience discrimination so many do just stop going to school. Also it makes a difference that Norfolk is a rural area, which has an overwhelming majority of white people. In isolated places Black and Indian minorities can suffer more because they don't have the support of a large community that they would in cities like Birmingham. Another problem in Norfolk is that racism isn't often thought about because there is so little ethnic diversity, and racism, overt racism just isn't in peoples faces enough for them to be concerned about it. Still it is very clear to me or anyone who has a quick look at the issue that racism does exist in Norfolk's schools, just like in all other schools in England. It is this covert racism within the school system and in everyday live that can cause ethnic minority children to underachieve". As I could find no secondary data which involved Norfolk this information was again new too me, but it was what I had expected to find from own experience of the Norfolk education system. I have heard many people over time say that because Norfolk lacks in ethnic diversity it makes it harder for any minority ethnic groups in Norfolk because many of peoples views are racist and their isn't a sense of belonging because there aren't large communities. ...read more.

This meant that to find out about how the situation is different in Norfolk from the major cities I had to depend solely on my interview, which does take away to an extent the validly of my findings. But I still felt from my own experience that I could agree with what my respondent said, therefore I believe that there was truth in what he said. Another point is must of the more recent studies that I found focused on racism and there was little on culture to compare with the data I had from the 1980's, yet this happened to help me come to the conclusion that racism is felt to be a bigger reason to ethnic minority underachievement than culture. I felt that was some aimlessness in my interview, and I put this down to the fact that I hadn't done a pilot study. A lot of subjects were repeated, I not sure if it was because I wasn't asking my question in an clear simple way or that my respondent just wanted to make sure that he got his point across. This means that while some subjects like racism were talked about a lot, other subjects were more glossed over, like I felt that I didn't like enough information about culture. Therefore if I were to do this study again I would do a pilot study and take more control in the interview. I was glad that I had sent a summary of my context via email before my interview because it meant that my respondent knew what I was studying, and it saved time in the interview because we started talking about the subject straight away. Overall I believe that I got all the data I needed, and I felt that the conclusions I reached were valid. I would like to do some further study into the subject, however I would like to travel to other parts of the country and do some observational studies, to find out how children think and feel about the situation, because I felt that the area I live in does limited me. ...read more.