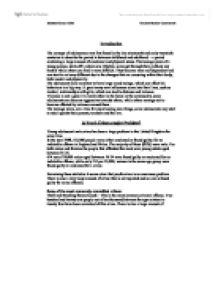 Is Youth Crime a major Problem?

Introduction The concept of adolescence was first found in the late nineteenth and early twentieth centuries to describe the period in between childhood and adulthood - a period containing a large amount of emotional and physical stress. The teenage years of a young person, starts off a whole new lifestyle, some get through them without any trouble while others can find it more difficult. They become more self dependent and can start to act very different due to the changes that are occurring within their body, both mental and physically. The adolescent male may start to have large mood swings, which can affect his behaviour in a big way. A great many new influences come into their lives, such as alcohol, relationships with girls, which can lead to distress and violence. Violence is not a gene it is learnt either in the home or the community, some adolescents can become aggressive towards others, while others manage not to become affected by violence around them. The teenage years, are a time for experiencing new things, some adolescents may start to rebel against their parents, teachers and the law. Is Youth Crime a major Problem? Young adolescent male crime has been a large problem in the United Kingdom for some time. In the year 1998, 532,000 people were either cautioned or found guilty, for an indictable offence in England and Wales. The majority of these (82%) were male. For both males and females the people that offended the most were young adults aged between 16-24. ...read more.

It doesn't have to be a major thing it can be a small boundary, but then they would set themselves another hurdle to pass after that. Where the Problem Starts: The first place, where the problem begins is at home. Children need a strong home environment where they have empathy and support from their parents. If there are a lot of arguments and violence between the adolescent's parents or even towards the youth, this could certainly trigger a violent streak in the child. The adolescent could also learn from the arguments his parents went through and not be affected by them when he becomes older. There are two sorts of children at a young age: The 1st being a shy child who replicates what others say and do. These children are easily affected by what goes on around them do not make there own decisions, they are happy to follow what others do. The 2nd sort of child is one that thinks for themselves, is very resilient to what others say and do and do not imitate what they do, the child experiments by itself. This child is not prone to becoming violent or breaking the law. The second place is at secondary school. At this age their body is just about to go through a very large change where their emotions, hormones and body will be vulnerable to great change. They become prone too mood swings and start to mould into the average teenager. They start to become far more interested in new things, such as girls, alcohol and smoking. ...read more.

This would help in the short-term and would also give people who have offended perhaps a career in the future which should help deterrent them from re offending after they have been released. iii) Future hope - A child always needs something to look forward to, if it's the smallest thing to one of the most important things in their lives, they need it. Whatever it may be it helps them focus towards the goal that they want to achieve, this means that they think less and less about crime. If everyone were given something to look forward to, and maybe say you cannot have this hope or dream if you do something against the law, it would act as a major deterrent to crime. This would be a short-term thing, if everyone could come up with something to hope for in the future. In conclusion adolescent male crime is far too high. Over 50% of all crime is committed by males under the age of twenty-one. It is in the interest of society that this is reduced quickly. The problem is not new and solutions require concerted action by a wide range of people. The key factors are providing a caring and supportive environment for young males to grow up in. Both parents and teachers have a responsibility here. This can be supported by positive behaviour by role models such as sport stars and TV personalities. The aim of this is to increase self-esteem and achievement by the young male, encouraging them to channel their energy into hobbies rather than crime. But the most important factor must be to provide hope for the future and opportunities to make positive contributions to society. Michael Gilson 12RG General Studies Coursework ...read more.