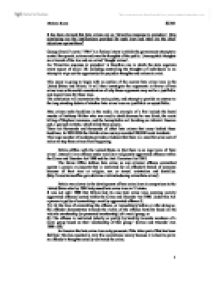 It has been claimed that hate crimes are an 'Orwellian response to prejudice'. How convincing are the justifications provided for such laws and what are the chief objections against them?

It has been claimed that hate crimes are an 'Orwellian response to prejudice'. How convincing are the justifications provided for such laws and what are the chief objections against them? George Orwell's novel '1984' is a fictional story in which the government attempts to control the speech, actions and even the thoughts of the public. Unacceptable thoughts are a breach of the law and are called 'thought crimes'. An 'Orwellian response to prejudice' is therefore one in which the state regulates every aspect of social life including controlling the thoughts of individuals in an attempt to wipe out the opportunity for prejudice thoughts and actions to exist. This essay is going to begin with an outline of the current hate crime laws in the United States and Britain. It will then investigate the arguments in favour of hate crime laws with careful consideration of why these arguments may not be a justifiable and logical basis for these laws. The conclusion will summarise the main points, and attempt to provide an answer to the long-standing debate of whether hate crime laws are justifiable or unjustifiable. Hate crimes make headlines in the media. An example of a few include the brutal murder of Anthony Walker who was axed to death because he was black, the r****t killing of Stephen Lawrence, and the homophobic nail bombing on Admiral Duncan pub, a gay pub in Soho, which killed three people. ...read more.

*** (fragment consider revising) The weakness of this argument is that evidence also shows that some victims of crimes motivated by reasons other than hate were more emotionally affected than some of those victims targeted because of hate. Again the subject of averages crops up****, is it just to give an individual offender a more severe punishment because the law of averages suggest that victims of hate crimes may be more emotionally affected than victims of otherwise motivated crimes? Thirdly, Supporters of hate crime laws suggest that hate crimes send out a terroristic message. Apparently, an act of violence targeted at a member of a certain group results in repeat victimisation towards other members of this group. This can also create retaliation and counter-retaliation between the victims group and the offenders group. However, opponents of hate crime laws have also found problems with this line of argument. Jacobs and Putter *** suggest that if a hate crime is punished more severely on the basis that it can cause retaliation, the offender is therefore being punished because he chose a victim who is more likely to also break the law by carrying out attacks of retaliation. Although this is a slightly distorted sense of logic, it is a valid counter argument. *** Other types of crime can also be said to have a terroristic result on society, however these are not punished more seriously. Examples of these are crimes against the aged, s****l assaults and rapes, these all create a sense of fear within the community so why is it only hate crimes that receive the more severe punishment? ...read more.

Again, this is unlogical. Just because the objections to hate crime laws propose a stonger argument than those justifying them it does not mean that hate crime laws should not be prosecuted. Cases of this kind should be thouroghly investigated. However, extra punishment for thoughts is not right. *** The only plausible solution is time. As time goes on and diversity continues individuals in newer generations should be more accepting. It is already apparent that the majority of older generations are (stereotypically) less open to minorities than younger generations. As cultural diversity reaches the suburbs and villages there could be a chance that existing prejudices will be whittled out. Laws such as lowering the consent age of gay s*x, and allowing gay marriages show that we are living in a more accepting society. These laws reward the victims of hate crime, rather than punish the offenders. This in turn sends out a message to society that these people are to be accepted as equals. Discriminating against someone because of their race, religion, or s****l orientation is incomprehendable although this may be the opinion of the minority. Individuals are entitled to their prejudices just as long as they do not act them out by way of a crime against another human being. We are a part of a tolerant but outspoken society and this is something that we should all value. Current legislation only steps in when a thought is turned into an action. So far this is not infringing our rights to freedom of expression. ...read more.