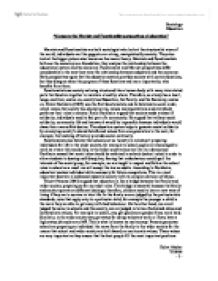 Marxist and functionalist perspective on education

"Compare the Marxist and Functionalist perspectives of education." Marxists and Functionalists are both sociologist who look at the structuralist view of the world; individuals are like puppets on a string, manipulated by society. They also look at the bigger picture also known as the macro theory. Marxists and Functionalists both see the economy as a foundation; they analyse the relationship between the educational system and the economy. Functionalist and Marxist perspectives differ considerably in the way they view the relationship between education and the economy. Both perspectives agree that the education system provides society with certain functions, but they disagree about the purpose of these functions and more importantly, who benefits from them. Functionalists see society as being structured like a human body with many interrelated parts that function together to maintain a healthy whole. Therefore, as a body has a heart, lungs, and liver, and so on, society has Education, the Family, and the Economy, and so on. Emile Durkheim (1903) was the first functionalists and he believed in social order, which means that society has shared norms, values and expectations and everybody performs their roles in society. Emile Durkheim argued that society needs a sense of solidarity; individuals need to feel part of a community. He argued that without social solidarity, community life and teamwork would be impossible because individuals would chase their own selfish desires. ...read more.

Davis and Moore (1945) came up with the theory "role allocation"; allocating us jobs according to our skills and abilities. They believe that social inequality keeps the economy going ensuring that the most talented people fill the most important roles. Education therefore sifts and sorts and grades people in terms of ability, which is rewarded in exam success, those with the most ability, are then rewarded in society in terms of economic rewards to ensure the best people fill the most functionally important roles. Blau and Otis (1978) equally argue that our modern economy depends on using its "human capital", it workers skill, in order to flourish. They put across the idea that a meritocratic education system does this best, since it enables each person to be allocated the most suitable job. The economy depends on strong skills produced by competition. Functionalist says we are all equal, it may well be that qualified status such as s*x, race, class is a more important factor in educational success and that the meritocratic principles of the education system may be beliefs to legitimate actual inequalities in society that the education system helps to reproduce. Tumin (1953) asks 'how do we know what makes a good job? Because it's highly rewarded? Why some jobs are more highly rewarded than others? Because they are more important!' ...read more.

Functionalists argue that schools operate meritocratically, however Althusser argues that this is merely ideology that makes people believe that the education system is fair when really it serves the interests of the ruling class because they control the education system. In school we are socialised into believing that schools operate on meritocratic principles, this ideology pacifies us and we do not see that the education system is really unfair and serves to reproduce the inequalities of society and the relations of production that benefit the capitalist class. Bowles and Gintis (1976) argue that achievement in school and a pupil's life chances are determined to a great extent by their family background, their class. Schooling takes place in the form it does in order to effectively prepare pupils for their future role as workers under capitalism. This preparation is achieved through the 'hidden curriculum.' They also argue that the hidden curriculum closely mirrors many features of the workplace. For example pupils do what they are told by the teachers, same way the employee does what the employer tells him to do. Bowles and Gintis also argue that the educations system furthermore helps to preserve and justify the system of social inequality in capitalist societies. It helps the subject class come to terms with their position in society, creating the idea of 'false consciousnesses.' Therefore, Bowles and Gintis eliminate the idea of Davis and Moore that social class inequalities occur from reasonable amount of competition. ?? ?? ?? ?? Sociology Education Zuhra Abukar Y18666 - 1 - ...read more.