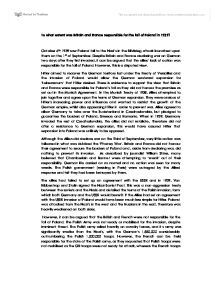 To what extent was Britain and France responsible for the fall of Poland in 1939? October 6th 1939 saw Poland fall to the n**i's in the Blitzkrieg attack launched upon them on the 1st of September. Despite Britain and France declaring war on German two days after they first invaded, it can be argued that the allies' lack of action was responsible for the fall of Poland. However, this is a disputed view. Hitler aimed to recover the German territory lost under the Treaty of Versailles and the invasion of Poland would allow the German eastward expansion for 'Lebensraum' that Hitler desired. There is evidence to support the view that Britain and France were responsible for Poland's fall as they did not honour the promises as set out in the Munich Agreement. In the Munich Treaty of 1938, Allies attempted to join together and agree upon the terms of German expansion. ...read more.

The Polish government (residing in Paris) were outraged by the Allied response and felt they had been betrayed by them. The allies had failed to set up an agreement with the USSR and in 1939, Von Ribbentrop and Stalin signed the n**i-Soviet Pact. This was a non-aggression treaty between the soviets and the Nazis and detailed the terms of the Polish invasion, form which both Germany and the USSR would benefit. If the Allies had set an agreement with the USSR invasion of Poland would have been much less simple for Hitler. Poland was attacked from the n**i's in the west and the Russians in the east, therefore was heavily weakened on both sides. However, it can be argued that the British and French were not responsible for the fall of Poland. The Polish Army was not ready or mobilised for the invasion, despite imminent threat. ...read more.

Moreover, the Germans were familiar with the Polish rail and road network as German engineers had constructed it. Polish defeat could have seemed inevitable for reasons such as these. The Blitzkrieg tactics which the n**i's employed were hard to withstand. However, it can be argued that Polish defeat was not necessarily inevitable. Under the terms of the Munich Agreement, the Poles gained some land from the Czech occupation, it is in this sense that Poland can be seen to be responsible for its own fall, in not offering a united opposition to the n**i's but seeking short term gains. In conclusion, although the Polish army was not completely mobilised and their policy at the Munich agreement backfired, it is arguable that Britain and France were responsible for the fall of Poland. Poland could not face the German army alone. Despite much resistance from Polish civilians, the government was overthrown on October 6th 1939, after the allies had deserted Poland and gone back on their pledge made at the Munich Agreement. ...read more.