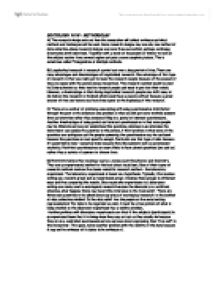 SOCIOLOGY H/W: METHODOLGY A) The research design sets out how the researcher will collect evidence and what methods and techniques will be used. Some research designs may use only one method of data collection. Many research designs use more than one method, perhaps combining observation with interviews. Together with a study of documents or history to look at the subject matter from several angles and gain a more complete picture. This is sometimes called Triangulation or Multiple methods. B) Longitudinal research is research carried out over a long period of time. There are many advantages and disadvantages of longitudinal research. One advantage of this type of research is that you really get to know the research sample because of the amount of time you spend with the person being researched. This research method would be used by Interactionists as they tend to research people and want to get into their minds. However, a disadvantage is that during longitudinal research, people may drift away or die before the research is finished which would have a massive effect because a great amount of time and money may have been spent at the beginning of the research. C) There are a number of problems associating with using questionnaires distributed through the post or the internet. ...read more.

A researcher who wants to obtain primary quantitative data about how people live their lives, or their attitudes or beliefs, will usually carry out a survey on a representative sample of the population being studied. The questions may be in the form of a questionnaire, possibly delivered through the post, or a structured interview, where the researcher asks the questions face to face and notes and response. The questions asked will be closed and straight forward and the answers then changed into numerical data. The data collection should be reliable but may not be entirely valid. Laboratory experiments, though they produce primary quantitative data, are seldom used in sociological research because of the problems of validity, ethics and scale. For topics where a survey is not possible or appropriate, the technique of content analysis may be used. For example, a researcher studying the lives of people in the past might analyse in quantitative terms the content of old letters and diaries; similarly, a study of the content of the mass media might analyse how much time or space is spent on each topic in the news media. A very large amount of secondary quantitative secondary data is available to sociologists from the official statistics that are published by the governments and its agencies. ...read more.

From the start the researcher will notes and keep a field diary, as inconspicuously as possible. In item B Stott was recording field notes while he was observing which helped with his research as the football fans were acting how they normally would. After a while the researcher can start asking questions, particularly to the key informant. How far this is possible will depend largely on whether the group members know that the research is being done i.e. whether the research is covert or overt. Towards the end of the research, there may be an opportunity to conduct unstructured interviews. The researcher must strike a balance between getting involved with the group and remaining an observer. If the researcher gets too involved ('goes native'), they will lose the detached perspective (objectivity) that a researcher must have. When writing the report the research report should describe the group's behaviour, suggest reasons for this behaviour, and, crucially, show how the evidence supports these suggestions. In item B the researchers gathered there notes and used them to detail the chronology of events as they happened; to describe the behaviour of those involved and use their evidence (recorded conversations, chants and shouts) to test their hypothesis. There are many strengths to participant observation such as participants behave normally, it takes the viewpoints of the participants and can 'dig deep' in to social interaction to find out what people think and the reasons they act as they do. ...read more.