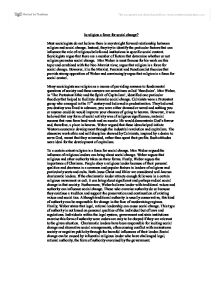 Most sociologists do not believe there is any straight forward relationship between religion and social change.

Is religion a force for social change? Most sociologists do not believe there is any straight forward relationship between religion and social change. Instead, they try to identify the particular factors that can influence the role of religious beliefs and institutions in specific social context. Sociologists argue that there are a number of factors that determine whether or not religion promotes social change. Max Weber is most famous for his work on this topic and combined with the Neo-Marxist view; argue that religion is a force for social change. However, it is the Marxist, Feminist and Functionalist theories that provide strong opposition of Weber and convincingly argue that religion is a force for social control. Many sociologists see religion as a means of providing answers to fundamental questions of society and these answers are sometimes called 'theodicies'. Max Weber, in 'The Protestant Ethic and the Spirit of Capitalism', identified one particular theodicy that helped to facilitate dramatic social change. Calvinists were a Protestant group who emerged in the 17th century and believed in predestination. They believed you destiny was fixed in advance, you were either damned or saved and nothing you or anyone could do would improve your chances of going to heaven. However, it was believed that any form of social activity was of religious significance; material success that rose from hard work and an ascetic life would demonstrate God's favour and, therefore, a place in heaven. ...read more.

showing that religion can act as a force against the consensus, if it so wishes. The religious, especially Calvinist, role in the development of capitalism is a primal example that religion is a force for social change and progress. Religion is shown to directly contribute to the development of the new ideology that is capitalism. The position and values of religious leader, especially with enough followers, in theory, are equipped to influence and encourage social change within their society. However, to a large extent religion is not a force for social change, but a force for social control. Both functionalist and traditional Marxist sociologists agree that religion is a conservative force. However, functionalists tend to view this as a positive thing, unlike Marxists who see this as a negative thing. Functionalisms main focus on the study of religion is religions contribution to social stability and value consensus in society. Durkheim argues that religion is rarely a matter of individual belief as most religions involve collective worship, ceremony and rituals, during which group solidarity is confirmed. The continual act of group worship and celebration through ritual and ceremony serves to create group identity, creating cohesion and solidarity. In maintaining social solidarity, religion acts as a conservative force; when it fails to perform this function, new ideas emerge that effectively become new religion. ...read more.

Mary Daley goes as far as to suggest that Christianity itself is a patriarchal myth. Women's bodies and sexuality have also been seen as dangerous by many religions. Women menstruate and give birth so are considered to have a greater capacity to pollute religious rituals. In addition, their presence may distract men from their more important roles involving worship. Bird points out that sexuality is an important issue in many religions. Roman Catholic priests are expected to be celibate, while some religions are still opposed to homosexuality. This reproduction of gender inequality and sexism with religious institutions directly hinders social change. Overall, Max Weber and Neo-Marxists argue that the values within most religion allow for social change through supported ideologies and the ability of religious leaders. Religious organisations have supported social movements and organisations that have resulted in social change. However, the socialisation of these religious values onto the individual means that religion being used to shape and control the individual. Therefore, as religion acts as a tool for the ruling class to justify the exploitation of the working class and encourages the working class to passively accept this position, religion is acting as a force for social control. Religion also promotes inequalities within gender and it reproduces traditional views of women, discouraging social change. It is clear that religion is used as a vital force for social control, whether this is seen as a positive thing or not is, in theory, irrelevant. ...read more.