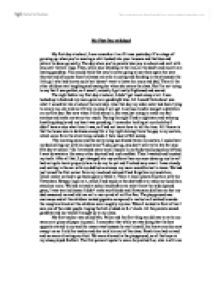 My First Day at School.

My First Day at School My first day at school, I can remember it as if it was yesterday. It's a stage of growing up when you're wearing a shirt tucked into your trousers and the blue and yellow tie done up neatly. The day when you're parents take you to school and wait with you until the bell rings. Then, while your standing in the line, all the dad's and mum's are waving goodbye. You would think that you're never going to see them again the way they act and of course there's always one who is crying and flooding in tears because the little girl who had brown curly hair doesn't want to leave her mum and dad. Then all the other children start laughing and teasing her when she enters the class. But I'm not trying to say that I was perfect, as I wasn't, actually I got really frightened and scared. The night before my first day at school, I didn't get much sleep at all. I was tucked up in bed and my mum gave me a goodnight kiss. ...read more.

There it was a plastic blue box with the Tottenham Hotspur logo on it, which I had stuck on the day before to make my lunch box stand out more. We had arrived at school and before we went threw the wide opened gates, I was worried incase I didn't make any friends and if everyone dislikes me but my dad reassured me and told me not to worry and all will be fine. The playground was enormous and all the children looked gigantic compared to me but as I walked towards the reception block all the children were roughly my size. When I looked in front of me I saw one of the older pupils ringing the bell at dead on 9 o' clock. All the parents waved goodbye and our teacher brought us to our class. My first teacher was called Mrs. Pallos and the first thing we did was to write our name on a piece of paper in pencil. I remember that while we was doing that the boy opposite started to cry and the reason was because he wet himself, but know one else new except me so I told the teacher and she took him out of the class. ...read more.

Lunchtime had finished and there was approximately 2 hours and 30 minutes left of my first day at school. I thought to myself that the day is nearly over already and has not been bad at all. I had made new friends and everything seemed brilliant. In the afternoon it was story time, we had to go round in the class and tell everyone about what we did in the summer holiday. While Sarah was telling everyone about her holiday in America I was talking to Lui about football. Then Mrs. Pallos caught us talking and all I could think of was my sister saying that if you talk in class when you're not meant to, you will get a detention. My face went all red and Mrs. Pallos just told us to pay attention. I was really pleased afterwards, because I thought a detention would be coming my way. As usual my sister lied again and made me panic for no reason, even though it's wrong to talk while the teacher is speaking. The bell rang at half past 3 and my first day at school had gone well, except being told to pay attention but some how I managed to miss that part out when I told my parents what happened at school. ...read more.