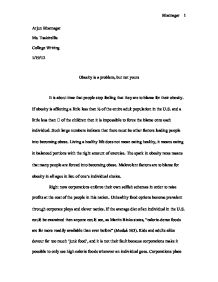 Obesity is not the individual's problem. The spark in obesity rates means that many people are forced into becoming obese.

Arjun Bhatnagar Ms. Tsakirellis College Writing 1/19/12 Obesity is a problem, but not yours It is about time that people stop feeling that they are to blame for their obesity. If obesity is affecting a little less than ? of the entire adult population in the U.S. and a little less than ? of the children then it is impossible to force the blame onto each individual. Such large numbers indicate that there must be other factors leading people into becoming obese. Living a healthy life does not mean eating healthy, it means eating in balanced portions with the right amount of exercise. The spark in obesity rates means that many people are forced into becoming obese. Malevolent factors are to blame for obesity in all ages in lieu of one's individual choice. Right now corporations enforce their own selfish schemes in order to raise profits at the cost of the people in this nation. Unhealthy food options become prevalent through corporate ploys and clever tactics. If the average diet of an individual in the U.S. ...read more.

The economy creates an environment where exercise loses value to hard cash. Kids are equally forced to give up exercise in exchange for better grades. As Binks graciously puts it, "the average child doesn't have any physical activity in school" (Motluk 563). If many schools no longer even have breaks, let alone structured physical education then how can a parent expect a fit child? They simply cannot think that the schools will support the children. These absurd schools are putting "physical activity on the back burner in favor of test results" (Motluk 564). The schools do not realize that a healthy student will produce better results than an obese one. If the schools pressure students to forget exercise and focus on studying and the economy pressures parents to focus on bringing bread to the table then how can you blame an individual for becoming obese? Obesity is becoming a problem that is not individual fault and no one has the right to blame the affected individual. The parenting and culture within America are also to blame for the obesity problem. ...read more.

In this culture it is important to first identify the problem and then find a way to solve it. Within the society there is "a great deal less access to physical activity then ever before in history" (Motluk 563). This means that more problems within the culture are aggravating the rise in obesity. If towns can be built in such a way that makes it "increasingly difficult to get anywhere without driving" and creates "suburbs without sidewalks" then how can an individual reduce his chances of becoming obese? In short, an individual cannot reduce his chances of becoming obese without fighting his culture and his parents. Every person, every place, and every thing affect a person's chance of becoming obese and the entire blame cannot simply shoulder on the affected individual. Living healthy means eating in balanced portions with the right amount of exercise and within this country everyone is living in an "obesogenic" environment. The corporations, external stress, parents, and even the culture are all leading people into obesity. If something has to be done then fixing an individual's surroundings is the first step. Obesity is indeed a problem, but it is not just one's problem to fix. 1 Bhatnagar ...read more.