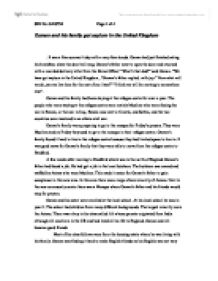 Osman and his family got asylum in the United Kingdom

Osman and his family got asylum in the United Kingdom . It was a fine summer's day with a very few clouds. Osman had just finished eating his breakfast, when the door bell rang. Osman's father went to open the door and returned with a recorded delivery letter from the Home Office." What's that dad?" said Osman. "We have got asylum in the United Kingdom , "Osman's father replied. with joy." Now what will we do, can we live here for the rest of our lives?" "I think we will be moving to somewhere else". Osman and his family had been staying at the refugee centre for over a year. The people who were staying at the refugee centre were mainly Muslims who were fleeing the war in Bosnia, or the war in Iraq. Bosnia was next to Croatia, and Serbia, and the two countries were involved in an ethnic civil war. Osman's family were preparing to go to the mosque for Friday's prayers. They were Muslims and on Friday they used to go to the mosque in their refugee centre. Osman's family found it hard to live in the refugee centre because they had limited space to live in. ...read more.

Osman and his father had a long chat and decided it wasn't important to try to become English and gain acceptance from people who weren't interested in his future. It was more important to keep his identity and his faith. 703 words Commentary The inspiration for this story originates from recent events and stories that I have seen or heard. Several weeks ago I was watching the television. There was an interesting documentary on. It was a programme where an undercover reporter posed as an employee at an asylum seeker centre. The reporter was trying to uncover the abuse of asylum seekers at this centre. The reporter had a hidden camcorder where he could record any incidents of r****m etc. The programme was then shown on television. The programme caused a lot of controversy when it was shown. It uncovered the r****t attitudes of the staff to asylum seekers. The asylum seekers were treated in subhuman ways. Many of the asylum seekers are eventually granted asylum in the United Kingdom. They will try to integrate into the communities in which they move to. If this is their first impression of the UK then their outlook will have been affected by a minority of staff at these centres. ...read more.

The story is mainly set in deprived areas of Northern England which don't represent the UK. There were racial riots in Burnley in 2003 .These were mentioned in Monica Ali's novel Brick lane. These riots caused a backlash in the community which the BNP were able to take advantage of in local elections. The BNP were able to exploit issues of race , immigration , asylum seekers after the riots. The BNP took advantage of local people's insecurities about employment, housing. The situation for Asylum seekers in Europe is becoming worse as many European countries are electing governments which are opposed to immigration and limiting the number of Asylum seekers. An asylum seeker can be defined as someone who has grounded fears of persecution for reasons of race, religion, nationality, membership of a particular social group, or political opinion in their own country. They are usually unwilling to return home. The representation of asylum seekers has to be more positive to prevent the abuse which was shown on the television documentary from reoccurring. 1534 words 1 Buddha of Suburbia by Hanif Kureishi, 1990. 2 Contemporary British Fiction: An introduction through interview, London Arnold,2002. 3 Gabriel's Gift. London: Faber and Faber, 2001. 4 Roy Jenkins's, Home Secretary in the Labour government, expressed a similar view about being an Englishman 1966. ?? ?? ?? ?? SID No: 0415794 Page 1 of 4 ...read more.