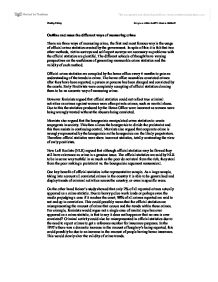 Outline and asses the different ways of measuring crime

Outline and asses the different ways of measuring crime There are three ways of measuring crime, the first and most famous way is the usage of official crime statistics created by the government. In spite of this it is felt that two other methods, victim surveys and self report surveys are necessary as problems with the official statistics are plentiful. The different schools of thought have varying perspectives on the usefulness of generating measurable crime statistics and the validity of each method. Official crime statistics are compiled by the home office every 6 months to gain an understanding of the trends in crime. The home office assembles convicted crimes after they have been reported, a person or persons has been charged and convicted by the courts. Early Positivists were completely accepting of official statistics claming them to be an accurate way of measuring crime. However feminists argued that official statistics could not reflect true criminal activities as crimes against women were often private crimes, such as marital abuse. Due to this the statistics produced by the Home Office were incorrect as women were being wrongly treated without the abusers being convicted. ...read more.

However the biggest problem with official statistics is the 'dark figure'. By using the other methods of measuring crime it appears that only 40% of all crime appears in the official statistics, leaving the 60% dark figure that is not included. This could be due reasons such as lack of evidence, although it could be due to the victims fear and embarrassment concerning the crime. Victim surveys are intended to find out all crime that is committed against a sample of the population. The first victim survey was done in the 1980's by the New Left Realist Jock Young in Islington, London. In the Islington victim survey Young noted the reasons for the behaviour of the inhabitants, such as fears to leave the house due to crime and reasons for not reporting criminal activities. In victim surveys unlike reporting the crime to the police the victims are able to stay confidential; therefore factors such as fear and embarrassment are practically eliminated. The victims are able to report multiple crimes that are committed against them of varying seriousness and have statistics created from them without any form of repercussions. However, it is believed that crime related to sexual offences is still down played. ...read more.

On the other hand, self report surveys are able to track crime from those that have not been caught by the law, or in fact anyone else. Self report surveys have been used in the past to gain information on crimes such as prostitution as it is often difficult to arrest for that crime as there are very few witnesses, as the clients are not exactly likely to admit their own illegalities. This means that crimes that would otherwise go mainly uncalculated and unrecorded can be measured. Problematically it is not feasible to do self report surveys or victim report surveys on a large sample meaning that they are not necessarily generalisable or representative. This of course poses a large issue when it is concerned with the measurement of crime trends. In conclusion, the use of a triangulation method, involving the accumulation of all three types of measuring crime would be best when trying to achieve an accurate picture of criminal activities. One method alone poses too many flaws and issues when trying to gain a truer idea of crime, methodological pluralism allows for less possible faults in the measuring crime system. ?? ?? ?? ?? Charley Emery Are you a crime-in-all? I mean a criminal! ...read more.