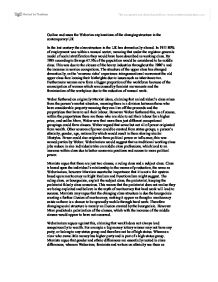 In the last century the class structure in the UK has dramatically altered. In 1911 80% of employment was within a manual sector, meaning that under the registrar-generals model of social stratification they would have been described as working class. By 1995 according to Savage 67.3% of the population would be considered to be middle class. This was due to the closure of the heavy industries throughout the 1980’s and the increase in service occupations. The structure of the upper class has changed dramatically, as the ‘nouveau riche’ experience intragenerational movement the old upper class face loosing their birthrights due to issues such as inheritance tax. Furthermore women now form a bigger proportion of the workforce because of the emancipation of women which was caused by feminist movements and the feminisation of the workplace due to the reduction of manual work.

Weber furthered on originally Marxist ideas, claiming that an individual’s class arises from the person’s market situation, meaning there is a division between those who have considerable property meaning they can live off the proceeds and the propertyless that have to sell their labour. However Weber furthered this, as of course, within the propertyless there are those who are able to sell their labour for a higher price, and unlike Marx, Weber saw that more than just different occupational groupings could form classes. Weber argued that some but not all of power originated from wealth. Other sources of power could be created from status groups, a person’s ethnicity, gender, age, nationality which would result in them sharing similar lifestyles. Power could also originate from political power or influence; this was named parties by Weber. Weberianism would suggest that as traditional working class jobs reduce in size individuals take on middle class professions, which lead to an increase within class due to better economic positions and access to more political power.

Marxists argue that there are just two classes, a ruling class and a subject class. Class is based upon the individual’s relationship to the means of production, the same as Weberianism, however Marxism asserts the importance that it is not a fair system based upon meritocracy as Right Realism and Functionalism might suggest. The ruling class, or bourgeoisie, exploit the subject class, the proletariat, keeping the proletariat falsely class conscious. This means that the proletariat does not realise they are being exploited and believe in the myth of meritocracy that hard work will lead to success. Marxists may argue that the changing class structure is due the bourgeoisie creating a further illusion of meritocracy, making it appear as though a meritocracy exists as there is a chance to be upwardly mobile through hard work. Therefore changing social structure is merely an illusion created by the bourgeoisie. However Marx predicted a polarization of the classes, which with the increase of the middle classes would appear to have not occurred.

Weberianism argues against this, claiming that wealth does not always lead unequivocally to wealth. For example a big money lottery winner may not have any party, or belong to any status group and therefore not be of high status. Whereas a vicar who earns little money has higher party and is part of a high status group. Marxists argue that gender and ethnic differences are essentially rooted in class differences, whereas Weberians, feminists and writers on ethnicity see them as separate and distinct. However both Marxism and Weberianism stem from the idea that social stratification results from a struggle for scarce resources in society.

Functionalists claim that social stratification is due to a necessary and functional hierarchy system that allows for a meritocratic society in which with hard work and education anyone can achieve status. This would suggest that social mobility is due to the meritocratic society and that individuals have to work harder to gain status creating a progression of society. This has led to better education, for example the increased amount of university education within contemporary UK. Furthermore Davis and Moore argue that there is only a limited supply of individuals that have the talent to require the most important positions and therefore there will always be the less skilled working classes. New Right realists confirm the functionalist idea that hard work can lead to achievement, and it is entirely opposed by Marxism. Even though Davis and Moore claimed that class is proof of a meritocratic society that has been highly criticised due to long running institutions such as the old boy network, that help those with connections and not necessarily those with the best skills. This reaffirms the Weberian perspective, claiming that a person’s social group can affect their status and therefore social class.