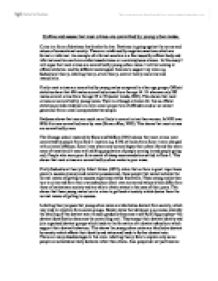 Outline and assess that most crimes are committed by young urban males.

This shows that these young males turn to crime to get back at society which denies them the normal means of getting to success. Labelling theory argues that young urban males are labelled as deviant from society, which may lead to rejection from social groups. Becker states that deviance is a process whereby the labelling of the deviant actor as such gradually becomes a self-fulfilling prophecy-'the deviant identification becomes the controlling one'. They accept their deviant identity and join organised deviant groups which leads to the formation of a deviant subculture which support their deviant behaviour. This shows the young urban males are labelled as deviant by society which affects their identity and status and leads to further deviant acts. There are many disadvantages to this view. labelling theory fails to explain why some people are selected as likely deviants rather than others. Also people do not just become criminals become they are labelled as such. They know that they are breaking the law e.g. people don't just become burglars just become they are labelled as such. Control theory states that young people have less to lose than others as they do not have any effective bonds. ...read more.

Although the criticism for this view is firstly that the claim that all men want to accomplish hegemonic masculinity is questionable as this can be more of a popular stereotype. Secondly Messerschmidt uses the idea of masculinity to explain all crime that men commit e.g. r**e theft, domestic violence. Collier (1998) argues that Messerschmidt stretches the concept of masculinity much to far. To conclude all these theories have certainly made an important contribution to the understanding of why mostly young urban males commit crime. Information from Home office, and social trends survey provide us with evidence that young urban males do commit high rates of crime but how accurate and reliable these figures are is questionable. The Chicago school research shows that most crimes are committed by those from zone 1 (Zone of transition), while labelling theory argues that deviance by young urban males is a result of individuals being labelled by society. Also Messerschmitt argues that these young men are turning to crime to express their masculinity but are all crime committed by men to express their masculinity (e.g. r**e). This shows that there is no absolute truth. I think that most people commit crime so they can get back at society which denies them the normal means of getting success ...read more.