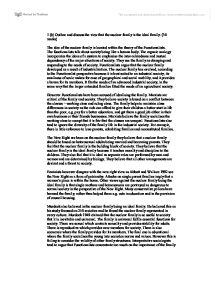 1 (b) Outline and discuss the view that the nuclear family is the ideal family. (30 marks) The idea of the nuclear family is located within the theory of the Functionalists. The functionalists talk about society being like a human body. The organic analogy incorporates the ideas of a system to emphasise the inter-relatedness and mutual dependency of the major situations of society. They see the family as changing and responding to the needs of society. Functionalists argue that the nuclear family developed as a result of industrialization. The nuclear family has evolved, according to the Functionalist perspective because it is best suited to an industrial society, its smallness of scale makes for ease of geographical and social mobility, and it provides a haven for its members. It fits the needs of an advanced industrial society, in the same way that the larger extended families fitted the needs of an agricultural society. However Functionalists have been accused of idealising the family. Marxists are critical of the family and society. They believe society is based on a conflict between the classes - working class and ruling class. The family helps to maintain class differences in society as the rich can afford to give their children a better start in life than the poor, e.g. ...read more.

However this is failing to consider the validity of other family structures. Interpretative sociologists tend to argue that Functionalists concentrate too much on the importance of the family to society and ignore the importance and meanings of family that individuals perceive. Murdock's study is also very outdated and cannot contrast with today. Talcott Parsons stated that the nuclear family was the ideal family structure. He said that there were to irreducible functions of the family. These are the primary socialisation of the family and the stabilisation of adult personalities. The primary socialisation of the children is where children learn to accept the value the norms and value the norms and values of society and gender roles. Gender roles are taught to the daughter by the mother who shows an expressive role suited to the emotional and caring aspect of the family. The father teaches the sons discipline and to become a breadwinner this is known as the instrumental role. The stabilisation of adult personalities is where the family gives adults the emotional support necessary to cope with stresses of everyday life. However this study was carried out in the 1950s so is now rather outdated and cannot be applied to the structure of society today as there are so many varied family types. ...read more.

This shows that the s****l function in Murdock's work is not staying between the Mother and Father and is being moved to the children to reach the Father's s****l desires. Domestic violence is also present in the nuclear family which is now breaking this type of family and forming the lone parent families and re-constituted families. 1 in 4 women experience domestic violence in their lifetime according to Elizabeth Stanko. This also shows that the nuclear family is not ideal as there are arguments between parents and this does not teach appropriate norms and values to the children through socialisation. Overall the Functionalists believe that nuclear family is ideal in terms of the older more traditional nuclear family such as the studies above e.g. Murdock and Parsons. However there are other views such as Chester that understands that over time there is change and the women can take a more active role within the family. The Marxists and Feminists however believe that it is not an ideal family as it doesn't include other forms of family that are now more recognised in the contemporary UK. In the nuclear family the women are seen as workers for the men and do not have much control which is not accepted by Feminists as they believe that there should be equal roles within the families. They believe that that family is based on patriarchy and that the family is one of the main sites in which men oppress women. ...read more.