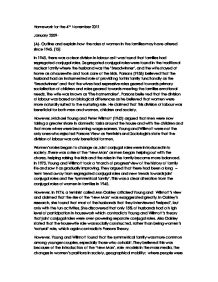 Outline and explain how the roles of women in the families may have altered since 1945. [15]

Homework for the 4th November 2011 January 2009- (A)- Outline and explain how the roles of women in the families may have altered since 1945. [15] In 1945, there was a clear division in labour as it was found that families had segregated conjugal roles. Segregated conjugal roles were found in the traditional nuclear family where the husband was the 'Breadwinner', and the wife stayed at home as a housewife and took care of the kids. Parsons (1955) believed that the husband had an instrumented role of providing for his family functionally as the 'Breadwinner' and that the wives had expressive roles geared towards primary socialization of children and roles geared towards meeting the families emotional needs. The wife was known as 'The homemaker'. Parsons believed that the division of labour was based on biological differences as he believed that women were more naturally suited to the nurturing role. ...read more.

They argued that there had been a long -term trend away from segregated conjugal roles and new trends towards joint conjugal roles and the 'symmetrical family'. This was a clear alteration from the conjugal roles of women in families in 1945. However, in 1974, a feminist called Ann Oakley criticised Young and Willmott's view and claimed that the rise of the 'New Man' was exaggerated greatly. In Oakley's research, she found that most of the husbands that they interviewed 'helped', but only with the fun activities. She discovered that only 15% of husbands had a high level of participation in housework which contradicts Young and Willmott's theory that joint conjugal roles were over-powering separate conjugal roles. Also Oakley stated that the housewife role was socially constructed, rather than being women's 'natural' role, which again contradicts Parsons Theory. ...read more.

They found that women were 30 times more likely to be the last person to have done the washing. This research underlines that even though there had be a change in the conjugal roles, women were still the main 'Homemakers'. I conclude that the roles of women have changed from 1945 as women have gained more freedom by leaving the house and working and the divided conjugal roles have been made less common in the present day as the world is more characterised by full-time and part-time workers of both sexes. The introduction of the 'New Man' changed people's views that women are the 'Homemakers' and men are the 'Breadwinners' which led to a 'Genderquake'. However, many people argue that there is still a clear division between the conjugal roles in the house as women are still expected to do the household chores and look after the kids and men are still expected to be the 'Breadwinners'. ...read more.