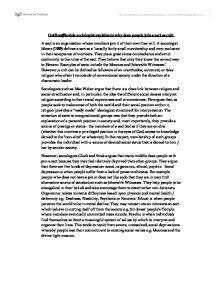 Outline/provide sociologist explains to why does people join a sect or cult.

Outline/provide sociologist explains to why does people join a sect or cult.

A sect is an organisation whose members join it of their own free will. A sociologist Moore (1988) defines a sect as a ‘usually fairly small membership and very exclusive in their acceptance of members. They place great stress on obedience and strict conformity to the rules of the sect. They believe that only they know the correct way to Heaven. Examples of sects include the Moonies and Jehovah's Witnesses’. However, a cult can be defined as followers of an unorthodox, extremist, or false religion who often live outside of conventional society under the direction of a charismatic leader.

Sociologists such as Max Weber argue that there is a close link between religion and social stratification and, in particular, the idea that different social classes interpret religion according to their social experiences and circumstances. He argues that, as people seek to make sense of both the world and their social position within it, religion provides a "ready made” ideological structured for interpretation. The attraction of sects to marginal social groups was that they provide both an explanation of a person's position in society and, most importantly, they provide a source of prestige or status - the members of a sect feel as if they are an elite (whether this involves a privileged position in the eyes of God, access to knowledge denied to the "non-elite" or whatever). In this respect, membership of such groups provides the individual with a source of desired social status that is denied to him / her by secular society.

However, sociologists Glock and Strak argues that many middle class people with join a sect because they may feel relatively deprived then other groups. They argue that there are five kinds of depression: social, organismic, ethical, psychic.  Social depression is when people suffer from a lack of power and states. For example people who does not have a job or does not like a job that they are in may find alternative source of satisfaction such as Jehovah’s Witnesses. They help people to be evangelical in their beliefs and also encourage them to covert other non-believers. Organismic relates to status differences based upon physical and mental health / deformity e.g. Deafness, Disability, Psychotic or Neurotic. Ethical is when people perceive the world to be in moral decline. They may retreat into an introversion sect which believe in cutting itself off from the society e.g. Jim Jones’ people’s Temple where members eventually committed mass suicide. Psychic is when individuals find themselves without a meaningful system of values by which to interpret and organize their lives. This tends to result from severe, unresolved, social deprivations whereby people lose their commitment to existing social values e.g. Moonies and the divine light mission.

This show that Sects tend to appeal most to the poorest sections of society; people who are looking for some kind of religious solution to moral and social problems. Sects, in particular, tend to focus upon themes such as the imminent creation of the Kingdom of Heaven on earth (Jehovah's Witnesses, for example), the end of the world (the Millennium) or some form of Millenarian return to a spiritual homeland (for example, Rastafarians and the return to their spiritual homeland of Ethiopia).

Whereas, Cults, tend to be highly unique and lacking in formal organizational structures (clerical hierarchies, meeting places and so forth). The followers of a cult tend to be their own self interest rather than their members, since there is rarely any formal joining mechanism. Cults tend to be relatively short-lived. In this respect, they tend to go in and out of fashion over relatively short periods.

Sociologist Stark and Bainbridge argue that there are three different types of cult which are audience, client and cultic cults. Audience tends to be people who has a general shared interest e.g. UFO or horoscope. Client are people who specifically organised to provide a particular service e.g. scientology. Cultic is where the leader of a group demand their members to try and get more attention and participation e.g. by selling books or suicide themselves e.g. the Solar Temple.

Many argue the people who will normal join a cult are those who are from a lower or underclass people especially those who are unemployed. Many suggest that young people tend to get ‘sucked’ into a cult rather the older generation. The reason for this is because they can have a sense of belonging. Also, pundits argue that another group of people who can join a cult are those who cut themselves from society or those who belief that have no sense of purpose in the world.

Looking at this argument many would argue that a person who joins a set or a cult is those from a working/underclass background. Many argue the reason that they join is because they either feel they don’t belong into the society or that they are depressed.