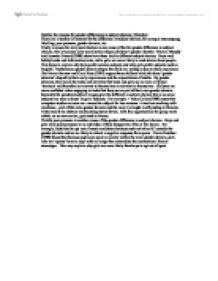 Outline the reasons for gender differences in subject choices

Outline the reasons for gender differences in subject choices (12marks) There are a number of reasons for the difference in subject choices, for example stereotyping, labelling, peer pressure, gender domain, etc. Firstly a reason for early socialisation is one cause of the for gender difference in subject choices, this is because early socialisation shapes children's gender identity. Patricia Murphy and Jannette Elwood (1998) show how these lead to different subject choices. Boys read hobby books and information texts, while girls are more likely to read stories about people. This helps to explain why boys prefer science subjects and why girls prefer subjects such as English. Furthermore gender domain shapes the child as a young as due to there experience like Naima Browne and Carol Ross (1991) argues those children's beliefs about 'gender domains' shaped by their early experiences and the expectations of adults. By gender domains, they mean the tasks and activities that boys and girls see as male or female 'territory' and therefore as relevant to themselves as relevant to themselves. Children are more confident when engaging in tasks that they see as part of their own gender domain. ...read more.

Increased number of female-headed lone-parent families may mean more women need to take on a breadwinner. This in turn creates a new adult role model for girls - the financially dependent women. To achieve this independence, of course, women need well-paid and therefore good qualifications. Likewise, increase in the divorce rate may suggest to girls that it is unwise to rely on a husband to be their provider; again, this may encourage girls to look to themselves and their own qualifications to make a living. Secondly there have been important changes in women employment in recent decades the 10970 equal pay act makes it illegal to pay women less than men for work of equal value, and the 1975 sex discrimination act outlaws sex discrimination in employment Since 1975, pay gap between men and women has fallen from 30% to 17% Some women are now breaking through the 'glass ceiling' - the invisible barrier that keeps them out of high-levels professional and managerial job. These changes have encouraged girls to see their future in terms of paid work rather than as housewives. ...read more.

However, they found that the way teachers interacted with girls was more positive because it focused on schoolwork rather than behaviour. Thirdly some sociologists argue that the removal of gendered stereotypes from textbook, reading schemes and other learning materials in recent years has removed a barrier to girls' achievement. Gaby Weiner (1995) argues that since the 1980s, teachers have challenged such stereotypes. Also, in general, sexist images have been removed from learning materials. This may have helped to raise girls' achievement by presenting them with more positive images of what women can do. Some reasons for boys' underachieving according to the DCSF (2007), the gender gap is mainly the result of boys' poorer literacy and language skills. One reason for the may be the parents spend less time readying to their sons. Another may be that it is mothers who do most of the reading to young children, who thus come to see it as a feminine activity. Furthermore the feminisation of education is another reasons for the boys falling behind. Tony Sewell mentions that education has become more 'feminised'. That is, schools do not nurture 'masculine' traits such as competitiveness and leadership. Instead, they celebrate qualities more closely associated with girls, such as methodical working and attentiveness in class. ...read more.