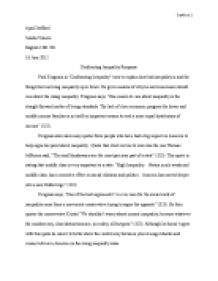 ﻿Stafford April Stafford Sandra Valerio English 1301.501 16 June 2012 Confronting Inequality Response Paul Krugman in ?Confronting Inequality? tries to explain how bad inequality is and the things that can bring inequality up or down. He gives reasons of why he and Americans should care about the rising inequality. Krugman says, ?One reason to care about inequality is the straight forward matter of living standards. The lack of clear economic progress for lower and middle income families is in itself an important reason to seek a more equal distribution of income? (322). Krugman also uses many quotes from people who have had a big impact on America to help argue his point about inequality. Quote that stuck out on its own was the one Thomas Jefferson said, ?The small landowners are the most precious part of a state? (323). ...read more.

Even though most families move around trying to send their kids to good schools so they can get a better education in hopes they will continue on to college. This just says that no matter how good or bad your parents are doesn?t always determine on how the child will be in their futures. Krugman does argue a great point that inequality is nearly sky rocketing in today?s society and it?s not good. Feeling that inequality should decrease more than increase to make America what people call the free country. Its sad going around hearing and seeing all the unequal people lining up for help just to get turned down. No one would want to ever have to go through life knowing they are seriously unequal to everyone else. On another note having to disagree with eliminating inequality completely would tear this country apart with nothing but anger and war toward each other. ...read more.

Like when he talks about the hedge fund loopholes and mentions Americans lose $6 billion annually through the oversight. Krugman then correlates that with the ability to provide healthcare to 3 million children. This is only on loop hole out of many others, just imagine how much money could be squeezed out of the rich. I can honestly say they can?t squeeze anymore out of the middle class. Krugman doesn?t really consider people taking action into their own hands. He is what I like to call a theorists that thinks maybe if we get the right legislation and get the ball rolling politically we can solve these problems. My generation especially, realizes this will never work and elected officials are not going to change anything. I believe things are very unbalanced and some people are doing a very good job of keeping it that way. When the government loses control of leveling the playing field, just like in the past, the people are going to have to step up. ...read more.